Fighting for His Life: Chabad Rep Says ALS A Test of Faith 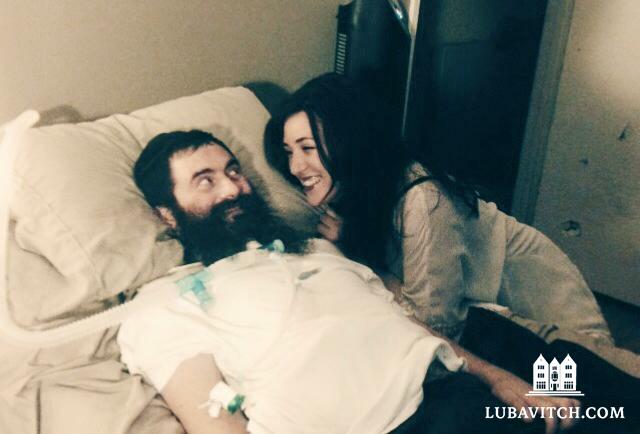 Keeping Faith, Keeping Dignity
Since then, his voice has become weaker (he now uses a small microphone), and the effort it takes for him to speak, greater. Sometimes, said Dina, she notices Yitzi withdraw into a corner. “He doesn’t talk as much; he doesn’t walk around the house singing as he used to. My husband is a very verbal person. I’m not used to him being quiet.” But he still gives the Shabbat sermon at Chabad of Temecula every week, and he still leads a Torah study class every Wednesday.
“Some people are too heartbroken to listen to him, because they see how difficult it is for him, or because it takes him too long to get the message across,” said Dina. “They now have to watch his lips and listen closely to hear him, but they come anyhow to be inspired by him. Unfortunately, a lot people have trouble in their lives. They come in and listen to him and they leave a little happier. The fact that he can still teach is what keeps him positive.”
Keeping positive in the face of his diagnosis is a test of his faith, Yitzi said.  “I have always taught others that everything G-d does is for the good although we don’t always see it openly. So now, when this happened to me, I have to live with this same belief and deepen my faith, so that it is not just a matter of words.”
Dina laughed when she talked about her husband’s “irrational” optimism. She said she knows she “married the happiest man in the world,” and works hard at staying positive herself. She tries to hide her fear when she’s around her husband and her children, “because they’ll mirror my feelings.” But these days, thoughts about the future weigh heavily and keep her awake at night.
“I know that miracles happen through medicine or through any other way. But I also know,” she admits, trying to suppress her tears, “that sometimes people die, sometimes really good people die. And that’s the part that scares me.”
There is a long pause on the phone. Then she says quietly, almost to herself, “There’s also the aspect of maintaining dignity. Maintaining someone’s dignity while their body fails them, that takes a lot of strength.  I hope I have it.”
In every way, life has changed for the Hurwitz family. They no longer take “a light attitude to life. Everything makes a bigger difference. We work harder at making our memories matter more than if you have an endless supply of life’s memories.”
On the positive side, she’s now spending more time with her husband. In addition to his responsibilities as Chabad leader of Temecula, Yitzi worked as a kosher supervisor and a chaplain. “He was hardly home. Now we have real time together, and the children see much more of their father.” Dina is also getting over her fear of public speaking. “I have to be Yitzi’s mouthpiece now, and I’m learning to do it.”
Since her husband’s diagnosis, Dina’s posted two entries on her blog that were both remarkably positive, expressing gratitude for the support and the many friends who celebrated with her and Yitzi at their son’s bar mitzvah recently. When we spoke, she was working on another entry about what the difficult days are like.
“I feel like I owe it to other people going through hard times so that they should know that there’s also fear, and sadness. A lot of fear.”
She tries to focus on the factors that are working in her husband’s favor. He’s strong and was in very good physical shape until the onset of ALS. She and her husband are surrounded by dedicated friends who “keep us from falling.” And there’s new research and experimental treatments that show promise. His friends are pursuing several different clinical trials, including Brainstorm in Boston, at Mass General with Dr. Merit Cudowitz, a leading ALS specialist, and her team. As Simcha Backman said, “There will be a cure for ALS, and why shouldn’t Yitzi to be the first person cured of this disease?”
When Dina feels scared, she complains to G-d. She finds comfort listening to Chasidic melodies, and studying Tanya. And she works hard to manage her thoughts.
She recalled a family trip to Bear Lake several years ago. It was a beautiful day, so beautiful that on impulse, she jumped into the lake with her clothing. It didn’t take long before her legs got caught in her skirt, and she panicked.
“I felt like I was going to drown. My husband calmly told me to put my legs straight down, and I did. As soon as I did that, I found to my embarrassment, that the water was so shallow. I was standing in only three feet of water, and I was fine.
“So my question is: can you drown in three feet of water? The answer is, yes, absolutely. But until you put your feet down, you don’t know that the ground is right there beneath you.”
Dina thinks about this when her fears get the better of her. ”Right now, I’m standing in murky water, where the bottom is not visible to my eye. That doesn’t mean it is not right under my feet. But I surely won’t find it in my state of panic.”
“The only thing I have control of is how I behave when I’m feeling vulnerable. Do I trust that help can be very close, or do I drown in three feet of water?
“I tell myself this a lot,” says Dina. “Sometimes it works better than others.”
Please keep Yitzchok ben Bracha in your prayers. To do a mitzvah in Yitzi’s honor, go to www.amitzvahforyitzi.org. To contribute to family and medical expenses go to hurwitzfamilyfund.com