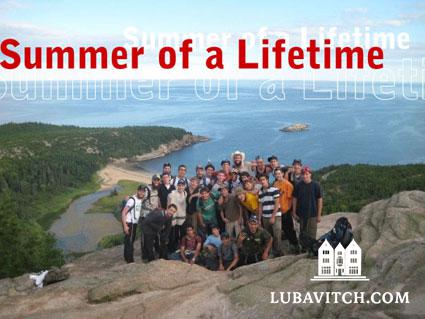 (lubavitch.com) Michael Harari arrived in Seattle Tuesday morning. After stashing his camping gear in the bowels of a 46-passenger school bus, he settled in the driver’s seat for the 14-hour trip to San Francisco, 809 miles down the coast. Rabbi Harari, whose day job includes teaching at a Brooklyn yeshiva, got his CDL license in order to chauffer the campers and staff of Yeshivah Outdoor Adventure Camp.

“It is not for everyone,” he readily concedes, “but for those who do fit the bill, YOA offers the most productive and satisfying camp experience out there.” The extreme adventure camp, under the auspices of Chabad-Lubavitch of Colorado, is revving up for its third year. In its first summer teenagers hiked between Colorado and California; last year they explored the Northeast. This summer, promises the camp director, “we will go even higher.” Campers will spend three days scaling Mount Shasta’s 14,161 feet as part of their four-week trek across the Pacific Northwest.

These youthful adventurers leave San Francisco on Sunday to hike California, Oregon, and Washington. Throughout, they will go mountain climbing, extreme biking, ocean kayaking, and sailing. Following intensive training, campers will be licensed by the American Sailing Association to man 25-foot vessels.

Roni Arber, 17, can’t wait for summer and his second year at YOA. The Miami native explains that “there is no other camp like it. It is the only program that combines adventure with a religious aspect.” Aside from the intensity of the program, it is the pull of the staff motivating his return.

“They are not just counselors,” he says, “they are someone to talk to and be friends with.”

None of the seven staff members receive a salary for their dedication. All are “on duty 24/7, from the moment camp starts until each camper arrives home safely.” And not just anyone fits the bill, either.

Staff members are licensed lifeguards, EMTs and Wilderness EMTs, and qualified First Aid Responders. Most have rabbinic ordination as well. Twenty-seven year old Mendel Popack started out with YOA three years ago. In preparation for this season, he has concluded extensive training to become a certified sofer, scribe. As part of the curriculum Popack plans to teach campers the laws of being a scribe, demonstrate the tools used, and give each boy “the chance to do it themselves.”

This hands-on approach is a vital aspect of the camp’s philosophy. “The entire curriculum is not just theory, it’s touchable,” explains Rabbi Harari. “And it really works: when they return home they remember the lessons and implement them.” According to the American Camp Association, “children are at less risk at camp where they have a sense of community, develop intergenerational relationships, and learn through first-hand experiences.”

First-hand experiences extend beyond the extreme and the ritual. For these 26 teenagers who hail from across the world, this month is all about practical responsibilities. At the start of the summer, each camper receives two forks, two knives, a bowl and a cup. For the next four weeks, each is responsible for his own cutlery: the boys receive a small dishtowel, soap, and two sponges. When one teen lost his fork last summer, he whittled down a stick into a passable utensil. Since returning home, the makeshift piece has hung over his bed, symbolizing his accomplishment.

Everyone shares the responsibilities of cooking as well as pitching tents and cleaning the campsites they visit. “Skills and lessons are not learned, but rather lived in the outdoors,” explains Rabbi Harari. Upon her son’s return, one enthusiastic mom raved that “he appreciates what I do for him,” and “came home saying that he now cooks and cleans.” Shoshana Plotke loves that aspect of the camp as well. She originally sent 13-year old Zalmy to YOA three years ago, “because we were looking for something different.” He has been going back ever since.

“Camp has taught him to be self-reliant,” she maintains. “It has made him responsible.”

It is not only the boys and their parents who revel in the varied achievements summer heralds. For Popack, and the other staff members, the pinnacle of camp is “watching the campers challenge themselves and grow.” As Popack packs his own bags and readies for the next season of camp, he is full of anticipation.

“There is nothing like seeing a boy beaming after coming down from the top of a mountain or cooking dinner for the crew,” he enthuses. “Nothing like it.”