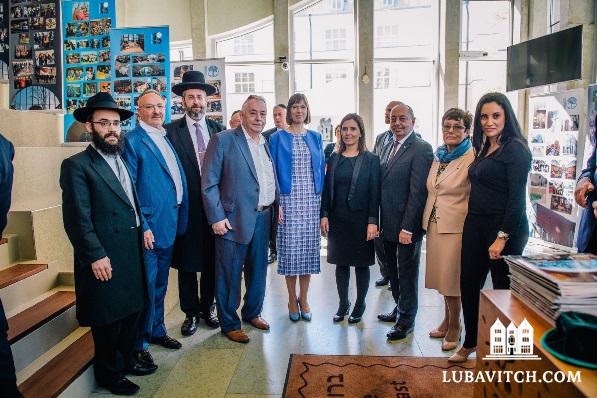 Last Thursday marked the 10th anniversary of the Jewish Community Center in Tallinn, Estonia, celebrating ten years of the first Jewish establishment built in the country since the Holocaust and a decade since Estonia became the last European country to finally get its own synagogue.

The center, which was dedicated by businessman and philanthropist Alexander Bronstein in memory of his mother Bella, houses the local Chabad branch which is co-directed by Estonia’s chief Rabbi Shmuel Kot and his wife Chana. Dedicated in May of 2007, the $4-million building can seat 180 people, with additional seating for up to 230 for concerts and other public events.

“The Tallinn synagogue tells the story of the fate of its Jewish community,” said Estonian President Kersti Kaljulaid, who was present at the event. “Estonia is proud of the fact that our country today has a flourishing and vibrant Jewish life.”

The history of the local community, noted Kaljulaid, is much like the history of Estonia itself—one of tragedy and revival, spanning the terrible years of the Holocaust but ultimately ending in triumph with a free, democratic, and independent Estonia. “Today,” Kaljulaid declared, “the synagogue is a beautiful and clear symbol of freedom.”

“Our two nations shared both the joyous and difficult times which we endured together… Both nations have needed to fight for their existence,” the president added, recalling the 178 Jewish women and men who participated in the Estonian War of Independence. “Both our nations know what it means to maintain our identity and freedom even under the threat of foreign powers, and we can be proud of our achievements.”

Seventy-five years ago, Estonia was the first country to be declared Judenfrei (free of Jews), after most of Estonia’s 4,000 Jews were wither deported, killed, or scared into fleeing in search of safety. The country’s synagogues were razed during WWII, leaving no trace of Jewish life in what had once been a bustling Jewish center. After the war, the communist regime strictly forbade the returning survivors to rebuild a Jewish community, and until just a decade ago, Estonia was the only country in Europe without a synagogue.

That changed in 2007, on the 40th anniversary of the reunification of Jerusalem, when a synagogue and Jewish community center finally opened in the capital city of Tallinn. At the time, former Israeli president Shimon Peres, who was then a government minister, represented Israel at the landmark event.

Over the past decade, Jewish activity and life in Tallinn have flourished, and many Jews who were cut off from their Jewish heritage have returned to identify themselves as Jews. Today, the Jewish community of Estonia numbers approximately 2,500.

This year, Estonia and Israel mark 25 years since the establishment of diplomatic relations between the two countries. Chief Rabbi of Israel David Lau and Israeli minister of social equality Gila Gamliel flew in from Israel for the event, where they were joined by Israeli ambassador to Estonia, Dov Segev-Steinberg.

Speaker of Estonian parliament Eiki Nestor, vice president of the European Commission Andrus Ansip, and director of the European Jewish Association Rabbi Menachem Margolin were also present at the celebration.

Learn more about the Jewish community of Estonia by visiting www.ejc.ee.