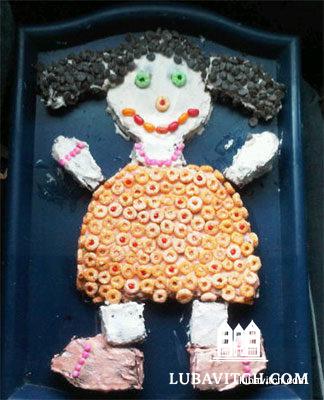 One of Devorah Freundlich’s doll cakes

When Devorah Freundlich, 13, of Beijing, China, is not busy with her schoolwork, she’s popping cakes out of the oven in her mom’s kitchen. They are custom cakes—dolls, police trucks, snowmobiles—and the young entrepreneur is working creatively to please her delighted customers. But in less than two weeks, she’ll close shop. That’s when she hopes she’ll have reached her goal: to raise $5000.

For Devorah, the daughter of the Chabad representatives to Beijing, China, an afterschool visit with friends would mean a ten hour flight. That’s because she’s a student at an online international Jewish day school, and her classmates are as dispersed as any random group of web surfers might be. The casual afternoon drop-in to a friend’s house is truly as foreign to her as the culture on her doorstep.

Separated by thousands of miles, these girls nevertheless are bound by like realities that transcend language and geographic distances. In Beijing or Brisbane, they share a common context as the children of Chabad representatives who study in virtual classrooms at the Shluchim Office Online School. Despite all the drawbacks of this arrangement, the school fosters friendships that defy distances and that grow to last a lifetime.

Once a year, at the annual Conference of Chabad Representatives, many of the girls travel along with their mothers to the Conference in New York. That’s when they get a chance to meet up close and experience their friendships in a three-dimensional reality.

At the Conference, the girls join a five day program that runs parallel to the women’s program, and allows them enjoy a social experience otherwise rare: hanging out with their peers, sharing Shabbat meals and late-night pillow talk during which they compare notes about their lives as junior Shluchos with each other.

This year’s conference is coming up January 26th, and Devorah is wishing that three of her online classmates would join her in New York. But airfare is prohibitive. So the eighth grader has decided to put her budding fundraising skills to work to cover the air fare for three of her classmates – two from Australia and one from Ukraine.

Her idea, to bake custom cakes in any variety of shapes and themes, and sell them at thirty dollars a piece, has taken off. So far, Devorah has sold more than thirty cakes, and has raised a thousand dollars.

She’s done the math and says she needs to sell at least another 100 cakes within the next two weeks, to make her goal.

“My goal is to raise enough money so I will be able to spend this special time with all my classmates,” said Devorah. “I am doing something I love – baking, to help out my friends, what could be better?”

Last Shabbos the eight grader’s dream was starting to seem a lot like reality. She had baked a welcome cake for a new girl in the school and presented it at the communal Shabbat dinner her parents host every Friday night. Guests at the table—many themselves from overseas—were so impressed by the young girl’s pluck, they decided to donate money to her cause. One gentleman donated the funds for one round trip ticket.

Devorah’s mother, Dini, trusts the project will succeed. “These are the Rebbe’s soldiers, children who live far away from friends and a “normal” Jewish environment. The Shluchim Office Online School is the lifeline for these children a whole year, with the kinus being the highlight for them, where they have a chance to interact with fellow children their age who face similar challenges.”

With the Conference only two weeks away, Devorah is turning cakes out of the oven as fast as she can, keeping her eye on the big prize: a trip to New York where she’ll get a week in hugging proximity to her classmates and friends.