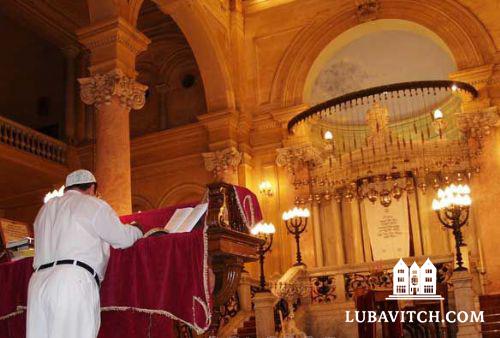 (lubavitch.com) About a dozen Chabad emmisaries participated Sunday in the festive rededication of the ancient Maimonides synagogue in Cairo.
They joined some 150 delegates from Jewish communities around the world who traveled to Egypt amidst very heavy security to rededicate the historic shul, which lay in ruins in the “old Jewish quarter” for some 60 to 70 years.
“For sixteen years straight we went to Egypt to complete the yearly Rambam learning cycle and we also visited what remained of the shul,” Rabbi Yosef Hecht, Lubavitch emissary in Eilat who joined th Cairo festivities, told lubavitch.com.

The synagogue, where Maimonides prayed 800 years ago, was renovated by the Egyptian Supreme Council of Antiquities (SCA). It is one of about 10 synagogues that authorities have included in its plan to restore major religious sites in Egypt.

“It was really in ruins, with broken walls and windows. It was moving that after so many years we could sit in the renovated shul.”
Even the side rooms of the shul – where some say Maimonides learned, and others say he healed the sick and practiced medicine – were renovated.
The rededication ceremony was highlighted by lively dancing, singing and the collective study of the last law in Maimonides’ magnum opus, the Mishne Torah. The large delegation of Jews who arrived from various points around the world by far outnumbered the 30 to 40 remaining elderly Jews of the once vibrant Jewish community.
“They were very excited. You could see the pride in their eyes,” said Rabbi Hecht. “It brought back memories because many of them davened in the shul as children and had not been back there since.”