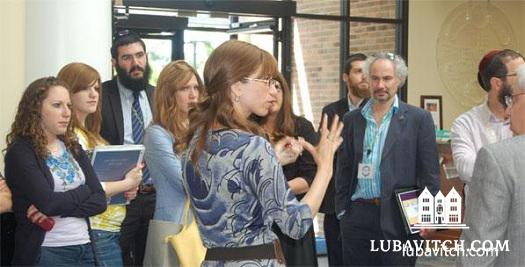 The initiative, designed to empower teens to stand up to bullying and social labeling, was launched by Bassie Shemtov, Co-Director of the Meer Family Friendship Circle. To date, 1,300 teenagers around the world have signed up at DefeatTheLabel.com where they record the results of weekly missions, to do one specific act of good for a friend.

“We have many volunteers at Friendship Circle who give special needs kids unconditional love and respect for who they are, not how they look,” says Shemtov. But socially, things weren’t adding up: “They go to school the next day and the eye-rolling, name-calling and bullying continues.”

Shemtov then took her idea to fifteen local schools, where she presented a curriculum of classes on anti-bullying themes and an array of hands-on and interactive activities. Students hung up posters that said ‘Nerd,’ and ‘Dork,’ under images of kids with glasses followed by the motto, Defeat The Label, sending a clear message of acceptance of all people despite outward appearances.

Four public schools accepted the pitch for a pilot program with 100 students (at each school), who will enroll for an eight-session course over the course of the coming school year. Bradley Scheck, Student Activities Director at Walled Lake Western High School says this program sets itself apart with a “focus on being proactive and changing kids’ views of others, unlike reactive programs that deal with bullying problems only after the fact.”

“Defeat The Label is more than just anti-bullying,” explains Scheck, who will coordinate the program. “It’s about getting kids to understand that people are more alike than unalike, about general acceptance of every person.”

Mrs. Shemtov will measure and hone the program based on results of the pilot program, after which she expects it will be incorporated by more schools. At Walled Lake Western, Scheck hopes to create leaders of his core group of 100 students and reach all 1600 students at the school.

“Eventually, these students could teach other classes after they complete the curriculum and impact more kids in the school,” says Scheck.

Online, the social media optimized site is keeping pace in the Defeat The Label campaign, with weekly results from users and prizes for winning reports, apparel and a recent short video by Australian pop star Cody Simpson promoting Defeat The Label.

In Farmington Hills, MI, twelve year-old Blair Bean works to promote Defeat The Label at her school. For years, she’s been the victim of bullying, but today her leadership role in this program has brightened her life considerably, says her mother, Stacey.

A social worker who is employed in schools, Stacey has found that her daughter’s “involvement in this program has strengthened her,” and is grateful, especially because she’s found that children today are “much meaner” than they were when she was a schooler.

“It used to be that generally the person being bullied was a special-ed child, or someone who had an obvious difficulty, but today it seems that anyone can be bullied because of appearances or behavior.”

Defeat The Label has taken the challenge to teach children that no apparent differences—be it as superficial as “wearing glasses” or more substantial as in learning disabilities, does not warrant a label, or render an individual less deserving of respect, compassion and friendship than anyone else.