Economic Woes and All, Hundreds of College Students Flocked and Rocked At National Shabbaton 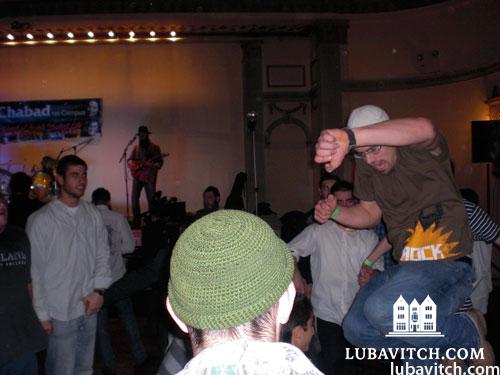 Gabe Rosenthal, senior at USCD reports from the ground.

(lubavitch.com) Going into the Chabad-on-Campus International Shabbaton in Brooklyn, I didn’t think that Chabad could attract enough students to match the success at last year’s Shabbaton. After all, our country is suffering from economic troubles. Many students like myself, hold part-time jobs while attending university, and the recent financial woes have made job opportunities scarce, a good salary scarcer, and vacation days the scarciest (not a word, but maybe it should be. . .)

My fears started to disappear when I arrived at the main hall on Friday afternoon, and saw that the 300-plus goodie bags, filled with kosher nosh, a commemorative yarmulke, the weekend program, and other great things, were all being given away. It turned out that over 500 people had registered for the event in advance, and the numbers kept growing to the last minute. Registration had to close a little early because so many people wanted to participate. Levi Margolin, one of the event’s coordinators, told me that the registration and turnout had surpassed his expectations by “leaps and bounds.”

In the end, between 650-850 enthusiastic college students were at this Shabbaton at any one time. They came from as far as Montreal, San Diego, and London, despite the high costs of plane tickets. Jason Tuvia, a student from California State University at Northridge, said “Less of my friends made it [this year] than came last year,” because of their financial situations. Still, other CSUN students were able to round out the University’s contingent – the school sent the same number this year as in 2007 – because they’d heard how much fun the previous Chabad events had been.

The energy at the Shabbaton this year was at an all-time high. I note that the University of Central Florida (UCF) sent 30 students, whose weekend Shabbat singing and cheering were loud enough to be heard from Kazakhstan! The group had received funding in the amount of $3,000 from their Student Government Association, which meant the trip to New York and the amazing Shabbaton cost only $100 per student. (Maybe that’s why they were so loud and cheerful?)

The weekend activities included a tour of New York’s great landmarks; davening in 770; amazing Shabbat meals; and a massive, carnival-like Melava Malka featuring one of the biggest dairy buffets I have ever seen and an awesome band called YOOD Power Rock Trio. YOOD rocked the night away. Their performance was definitely my favorite part of the weekend, and they are an exciting and inspirational rock group to keep an eye (and ear) on.

Students also had a wide range of over 40 different Farbrengens and lectures to choose from, including the ever-popular “Jewish Dating” lectures. This year, the Shabbaton also included events for participants in the Jewish Leadership Conference, with speakers and programs for a select group of Jewish students learning the leadership skills to be pillars in their respective communities for years to come.

The Shabbaton was “absolutely awesome,” said Joel Cannon, a UCF student. “I loved every minute of it!” The highlight, he said “was going to 770 and experiencing the Jewish life in a more in-depth way.”
For Sarah Bourne, a student from Santa Monica College, the entire Shabbaton was just the spiritual boost she needed.  She enjoyed, she said, being with ‘’Jews from all types of backgrounds, corresponding together in a harmonious environment.’’

The Shabbaton was also an amazing networking opportunity. David Yarus, a business student from Babson College and JLC member, came with the goal of “connecting college students with kosher products.” A business genius, David provided crates of free samples of foods like Honest Tea brand drinks (cute name, right?), which we all proceeded to stuff into our suitcases.

Natan Lustgarten, who was born in Columbia and studies at Baruch College, said that he particularly enjoyed his deep one-on-one talks with distinguished rabbis, such as a conversation about the relationship between science and Judaism, and another about Jewish unity. Concerning the messages he learned throughout the weekend Natan said, “I will keep them in my heart for the rest of my life.’’

Once again, the Chabad-on-Campus International Shabbaton left students and rabbis alike with great memories, experiences, and lessons that will last a lifetime. Friends, farbrengens and great singing made what should have been a difficult year to have a Shabbaton, a memorable weekend. I would like to thank all the local Crown Heights families for their support and hospitality.

This happens to be my final year as a student, and I really enjoyed and will cherish all of my time at these Shabbatonim. As Natan said, I will keep them in my heart for the rest of my life.