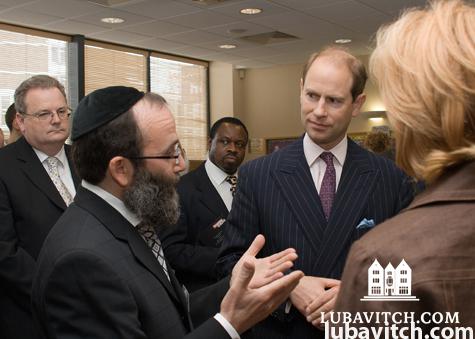 (lubavitch.com) Queen Elizabeth II celebrated her 83rd birthday last week with a parade in her honor (moved several months beyond her actual birthday due to weather concerns). As she does every year, the Queen announced a list of birthday honors commending the most prestigious achievements of her subjects. Rabbi Aryeh Sufrin, Chabad’s representative to Ilford, was nominated and chosen to become a Member of the Order of the British Empire (MBE).

This honor, for Sufrin’s “services to Jewish Community Relations and to Drugsline in North East London,” is long in the making. In 1991, Sufrin began Drugsline, a comprehensive drug rehabilitation center providing crisis intervention, education, counseling, and support to family members. It was not a mission he set out on, but 18 years later, Sufrin and the London community cannot imagine life without it.

“In the midst of my work with local youth it became apparent that there was a real drug problem,” says Sufrin. “No one talked about drugs in England back then, and I didn’t know anything about them either.” Sufrin attended courses on drug rehabilitation and convened community meetings to bring the problem to greater attention. In the beginning, he says, “I was fighting a single-handed battle.”

“London Jewry will not admit the drug problem in its midst and Aryeh has been at the forefront of opening the eyes of the community,” states Judge Justin Philips, head judge of London’s only drugs court. “The whole UK community is in his debt and I look forward to his charity expanding and hopefully connecting with drug work done within the Criminal Justice System.”

When Philips’ drugs court opened in 2003, Sufrin attended to show his support. And Philips spoke at the launch of Sufrin’s ground-breaking partnership with Imam Haroon Patel and the Muslim community.

The government recommended that Drugsline’s work be extended to local Muslim residents several years ago. Both communities, who together comprise approximately 20 percent of the local population, traditionally ignore drug abuse, preferring to sweep the shape and stigma under the carpet. Drugsline’s success with Jewish addicts was recognized as an effective means of dealing with faith-based communities. Their volunteers are trained to speak Gujarati, Urdu, and Bengali, and are sensitized to issues in the Islamic culture.

Though ideally, the organization would like to see a drop in clientele, the drug problem in London continues to grow.

A team of 60 trained volunteers mans their crisis hotline for several hours each morning and evening. They field approximately 1,000 emergency calls a year. Four outreach workers (in recovery themselves) visit schools across England, bringing 45,000 students the message that self-esteem is attainable and a natural high possible. The center’s counseling has a waiting list.

Together with Judge Philips, Member of Parliament Lee Scott nominated Sufrin for the distinction. “I have known the Rabbi for a great number of years as a Rabbi and friend,” Scott said. “He deserves this honour for the tireless work he does to help Drugsline help people who find themselves in a downward spiral. I hope the organization goes from strength to strength.”

It is an honor that every Englishman dreams of. “I was born in England,” says Sufrin, “and my family is proudly royalist. We visited all the palaces and went once on holiday to Aberdeen where we stood for hours to await the Queen’s arrival and wave to her. I appreciate royalty.”

Last year Sufrin and his wife were invited to the Queen’s legendary garden party where they met with Prince Edward, who participated in the celebration of their building’s extension several years before. “It was a fantastic, fantastic day.”

But this time, Sufrin will meet with the Queen herself and spend a few moments conversing together. “This honor is something I have always dreamed of,” he admits with boyish enthusiasm. “And I think the Rebbe would have been very excited about it as well.”

All thrills aside, Sufrin has his organization’s needs at the front of his mind. “I hope this honor will help us in many ways,” he says. “Being formally recognized by the Queen gives credence to our work and inspires our supporters. This gives us the impetus to face our challenges and hopefully the community will help financially.”