Donetsk Jews in Exile: Pray for Us 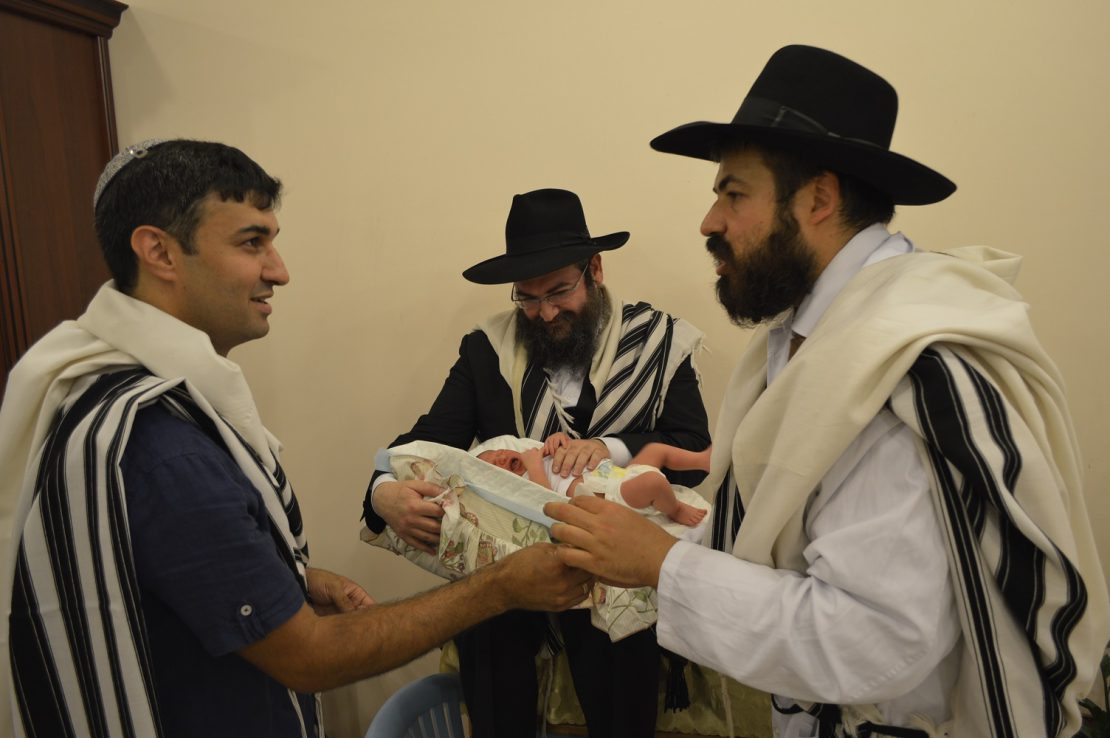 At left, Velvel Shtein, a Donetsk community member in exile, at his son’s bris in Kremenchug, with Rabbi Vishedski, center.

As world news about the middle-east dominates, less attention is being paid the plight of Ukrainian citizens and residents whose cities have been turned into raging battlefields. The dead are in the streets, food is scarce, and in city after city, hundreds of thousands have fled their homes for safer ground.

“It is a churban,” says Rabbi Pinchas Vishedski, using the Hebrew term for destruction. “It is a humanitarian crisis.” Vishedski, the chief rabbi and a long-time resident of Donetsk, has watched as the city’s Jewish community—a sizable 10,000 with a thriving infrastructure that he helped build, including a JCC, schools, camps, kosher shops and restaurants—has come to a screeching halt.

With a population of about one million, Donetsk has been nearly emptied of its residents following the invasion by pro-Russian and rebel forces. Some three fourths—nearly 700,000 people have fled in recent weeks.

Many fled to Mariupol, a port city some 120 kilometers south of Donetsk, which government troops won back from pro-Russian separatists in early June. But the rabbi remained until last week, making arrangements for his community members to leave. Exposed to rockets and gunfire, Vishedski finally left when the water tap ran dry.

“When the water supply was bombed last week, and there was no more running water here, I realized it was time for me to leave as well.”

Vishedski joined his wife and children, setting up an office in Mariupol, where he rented 50 apartments to house 200 people from Donetsk. Working together with the other Donetsk shluchim—there are 10 altogether—he says,“We are doing whatever we possibly can from here.”

Much of the funding to help his community people relocate and sustain themselves while they are out of work, he says, came from Rabbi Yechiel Eckstein’s Keren Yedidut, and from Rabbis David Mondshine and Shlomo Peles of the Federation of Jewish Communities of the CIS.

Yehoshua Sagirov, a stock trader, has been biding his time with his wife and children in Kharkiv, where friends have given him use of their apartment. With a newborn who arrived only six days before they fled, the family is anxious to return to their home, but no one can tell them when that will be.

“We had such a beautiful life in Donetsk,” Sagirov says wistfully, describing a thriving Jewish scene where people took ownership of their community, sharing the rabbi’s vision to create the rich Jewish lifestyle they enjoyed. “This is devastating to us.”

30 year-old Velvel Shtein, a shop salesman in Donetsk, is now living off his savings, staying with his wife and two children in Kremenchug. Like Yehoshua and so many other members of Donetsk’s Jewish community, Shtein is grateful for his smartphone, staying in touch with Vishedski by whatsapp.

When Shtein’s wife, Sveta, had a baby boy two weeks ago, the couple reminisced about the bris of their first son in Donetsk, “in the most exciting and interesting Jewish city in Ukraine.” If they couldn’t make their newborn’s bris in Donetsk, they at least wanted their rabbi with them, and Vishedski made the 7-hour drive to Kremenchug to participate at the bris of baby Aharon.

The unknown, all say, compounds the anxiety and stress. “No one is telling us anything, and we have no idea how long this will continue,” the rabbi says. In the meantime, for families with school age children, it’s back-to-school, but there is no school to go back to, so Vishedski is working with his colleagues and others in the area trying to get a temporary Jewish school set up in Mariupol.

Back in Donetsk, an eerie emptiness has replaced the noisy, boisterous JCC. The school building is closed, as is the kosher restaurant. A few Jews remained. One is keeping the synagogue open, and a quorum of Jews make their way, courageously dodging danger every morning to pray.

To donate to the Jewish refugees from Eastern Ukraine, click here.