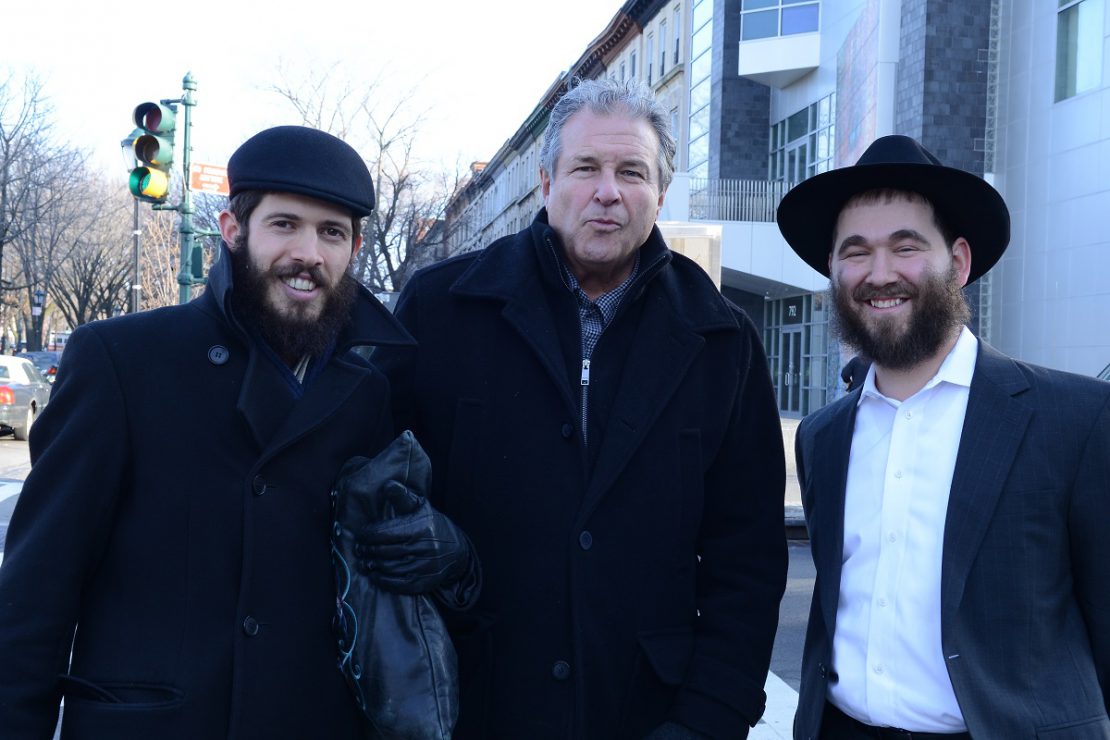 When Richard Singer went to meet a business client and close a deal more than 10 years back, he never imagined that it would one day lead him on a path to learning more about Judaism, and, ultimately, to having a Bar Mitzvah.

But last Shabbos, friends, family and congregants celebrated at Chabad of Passaic County when he was called up for an Aliyah. The words from Isaiah came out with effort, sometimes haltingly, always carefully articulated, as Singer read the Haftorah in Hebrew. Surrounded by family—including his wife, Robin, and their grown children, Michael and Julia, grandchildren, and friends— the 65-year-old successful businessman who trained as an engineer, defied an improbable odd in doing so.

Though he attended Hebrew school for a while, Singer, who grew up in South Orange, NJ, had his Jewish education was cut short when he was found to have a severe case of dyslexia well before the term was known.  As he recalled, he was in the car with his mother waiting at a ‘Stop’ sign, when he asked her why the road signs had the word “pots” on it. His mother realized there was an issue.

“Dyslexia was completely unknown at the time,” said Singer. “The doctor started to work with me, but I wasn’t on any reading level and he said, ‘We can’t have him learn Hebrew one direction [right to left] when still trying to learn English.’ ”

His hankering to know more about the Torah and the stories behind the stories would take a back seat as he negotiated his disability. But 50 years later, when Singer was asked to make a donation to a business associate’s congregation, Chabad Center of Passaic County, he seized the opportunity. When Rabbi Michel Gurkov came to Singer’s office, he brought mezuzahs to hang on the doorpost.

“We put up five mezuzuahs in my office and said the prayers,” said Singer. “We started to talk, and I told him about my dyslexia and how I was always interested in the Torah and reading and learning about it. So he brought me the small Stone Edition of the Torah. He said, “Read it.”

Motivated to Learn, One Step At A Time

“I began reading it every day.”

But learning on his own wasn’t giving Singer the in-depth knowledge he was seeking, and the next time he met with Gurkov, the Chabad emissary told him about a new initiative. The Jewish Learning Network, JNet, was just getting off the ground. Singer signed up immediately.

“I was one of the first people to get involved with the program,” Singer recalled. “I think it’s fantastic. It really provides a venue for people who are walking around out there not knowing the answers to particular questions they may have. You can ask any questions at all with no inhibitions.”

JNet, a Chabad initiative, pairs up adults who want to learn more about Judaism with a volunteer knowledgeable in their area of interest—be it the Torah, Jewish holidays, Jewish law or more. The learning takes place over the phone at a time that works for both parties. Since its inception, some 6,000 people have been matched up. Today, the program is offered in 50 countries and five languages, according to Managing Director Rabbi Yehuda Dukes.

Singer was eventually paired up with Rabbi Yossi Goldberg and in the seven years since they’ve learned together on the phone, rarely missing a week, they’ve become friends despite the physical distance that separates the two. Since they’ve begun learning together Goldberg has moved from the New York area to Europe to Vancouver, Canada, where the rabbi and his family currently lives.

Said Goldberg: “[Singer] wants to learn wherever he is or wherever I am. So even though I’ve moved countries and continents in last seven years, we’ve been able to maintain that connection. He himself thinks he missed out a lot over the years and he feels he’s catching up, but he knows more than many who come to synagogue regularly.”

While they learn primarily over the phone, the two have met in person several times and have gone to the Ohel, the resting place of the Rebbe, Rabbi Menachem M. Schneerson of blessed memory, together.

“It was emotional,” Singer told lubavitch.com. “I put on Tefillin (phylacteries) and we wrote a note. I felt very moved about how this man provided so much leadership to the Chabad organization that’s now helping me to learn Torah.”

Singer and Goldberg were reunited this weekend when the rabbi flew in from Vancouver to celebrate the Bar Mitzvah over an elaborate Shabbos at the home and Chabad center of Rabbi and Mrs. Gurkov.

In his sermon, Rabbi Gurkov spoke about Richard’s determination to study Torah at this stage in his life. He reflected on Rabbi Akiva—one of the greatest sages and teachers of the Oral Torah—who only begun to study Torah at age 40. “Here was someone who was ignorant of Torah until then, and he grew to be one of our greatest Jewish teachers” proving, he said, that it is never too late.

At a Kiddush following the services, an emotional Richard expressed his gratitude for having reached this milestone with the help of Rabbi Goldberg. “It took seven and a half years, but we did it.”