Coffee at Dartmouth, One Cup At A Time 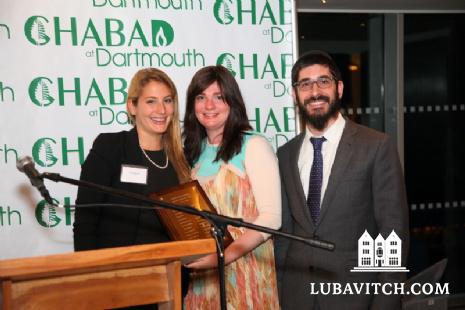 Rabbi Moshe and Chani Gray with a student.

On a mild spring afternoon at a café in the small idyllic town of Hanover, New Hampshire, Rabbi Moshe Gray was holding his fifth cup of coffee of the day. Unlike the other patrons of the venue, mostly over-caffeinated Ivy League students cramming for exams, the Chabad rabbi was not trying to stay awake.

Gray, 34, was laser-focused on the Dartmouth student sitting across from him talking about his recent trip abroad. The tête-à-tête, the rabbi’s fifth of the day, is Gray’s signature way of connecting on a personal level with Jewish students who walk into his Chabad house on campus.

With a student-faculty ratio of 8:1, and 63.3 percent of classes with fewer than 20 students, Dartmouth College is the smallest of Ivy League schools. Its 6000 students are used to personalized attention and quality time from their mentors. Chabad of Dartmouth, founded in the fall of 2003 by Moshe and Chani Gray, follows a very similar modus operandi.

“We molded Chabad here to reflect Dartmouth in a lot of ways,” says Gray. “We are extremely focused on investing in individual relationships and connecting on a personal level. My entire week revolves around getting coffee with individual students.”

He’d like to connect with every one of Dartmouth’s 400 Jewish students, and the coffee dates—there were over 70 during the last spring semester term alone—are one of the ways he gets to know them personally, in an intimate setting that is conducive to meaningful conversation.

Alexandra Essey graduated from Dartmouth with a degree in government in 2013. The “intellectual and community aspects of Chabad,” says the financial analyst now working at a prestigious finance firm in New York City, helped her develop her own Jewish identity and beliefs.

“The Rabbi was always very willing to get into discussion and debate about tradition and accepted intellectual curiosity, which is appealing to the Dartmouth student. He fostered discussion in an honest and accepting way, encouraging everyone to figure it out for themselves.”

Mr. George Rohr underwrites the Chabad on Campus Expansion Initiative, which was instrumental in establishing Chabad at Dartmouth. Students from top-tier colleges often go on to take important leadership roles in society, he observed, and the Jewish experience they have during these years can be transformative.

Visiting the Chabad House at Dartmouth, Rohr found what he describes as extraordinary students—thoughtful, curious, accomplished, and highly ambitious who felt at home in a Jewish environment. Moshe’s and Chani’s range, he said, make them just as comfortable debating theology with faculty members as they are having a conversation about something light with students.

Award-winning author and professor of Jewish studies at Dartmouth, Dr. Susannah Heschel, admits she was delighted when Chabad arrived here in 2003. The daughter of Rabbi Abraham Joshua Heschel and the great-granddaughter of a dynasty of Chasidic rabbis, Heschel appreciates the passionate enthusiasm Chabad brings to its activities and, she says, she often refers students to the rabbi.

“Jewish students need to be around people who are infused with the spirit of Judaism,” says Heschel. “Chabad is the only way for this to happen, because the students are exposed to joys of religious observance” allowing them, she explains, to really experience “how wonderful it is to be a Jew.”

With four little ones and one on the way, Chani Gray has observed that especially at this college, where students are seriously focused on their studies, the experience of a Shabbat dinner family table can be far-reaching.  “Sharing a strong family dynamic with them during these formative years can make a real difference. Years from now, when they choose to start their own families they will hopefully refer back to what they experienced here, at our Shabbat table.”

Following their parents’ lead, the four Gray children take their role as resident campus kids in stride. “They are not intimidated by the intellectual students and have no problem holding their own in a conversation,” says Chani, whose children choose favorites among the students. “They’ve been around them all their life and just see them as their friends.”

Professor of Hebrew Studies and Linguistics at Dartmouth, Dr. Lewis Glinert, recalled the profound impact a Chabad rabbi had on him during his time as a student at Oxford University and is glad to see Dartmouth’s Jewish students benefiting from a similar opportunity.

“I believe that Chabad knows how to speak to students in their language,” he said. The Shluchim have “an unconditional commitment to the students and are able to extend Torah study as the intellectual experience that students expect.”

Today, Chabad is well entrenched in the Dartmouth culture. At the beginning of the 2014 spring term, Dartmouth College’s new president, Philip J. Hanlon, and his wife joined 50 students at a Chabad Shabbat dinner in a show of support for the Jewish institution. Faculty and visitors often participate in the intimate weekly gatherings, giving Jewish students the opportunity to engage with academic leaders in a private, informal setting.

Carrie Wolf, a student starting her senior year says she “never thought I’d be texting my rabbi—I don’t think that’s normal among most college age students. But he’s a friend more than anything.”

Wolf gravitated towards Chabad during her sophomore year and joined a Birthright trip this past winter that has since changed her life.

“I traveled to Israel with all of Chabad of Dartmouth. I went with one of my best friends from childhood, also a Dartmouth student, and we had an incredible experience,” says Wolf. But when a personal tragedy struck this past March, Wolf was devastated. “This rabbi and this community from my Birthright trip rallied around me as I was experiencing this grief. They supported me throughout. Today I look around at my Jewish community and realize how much I need these people.”

Wolf, who says she always identified with the cultural aspects of being Jewish but never really thought about God or death or other big topics, discovered its relevance in a deeply personal way.

“My studies with Chabad and my discussions with the rabbi helped me figure out my beliefs in a way that was really meaningful to me. Suddenly all these big Jewish ideas could be applied to my life.”