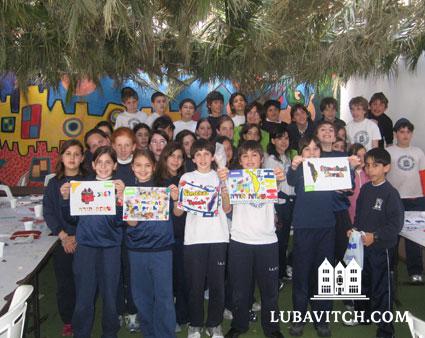 Uruguay’s Kids-in-Action devote time on Sukkot to reach out to orphans in Israel. For more photos, click on the image.

Each one personalized with the name of an Israeli child who lost a father to terror attacks or war, the flags celebrated the unbreakable connection between all Jews and demonstrated the tentative re-emergence of the Uruguayan Jewish community that had been decimated by the country’s economic collapse.

Students from the fourth and fifth grades of Uruguay’s largest Jewish schools squiggled paint from mustard and ketchup style squeeze bottles to design flags that reflected their feelings for their bereft peers so far away. Many mini-artists chose to paint an outline of Uruguay, a small country that sits in the crook between Argentina and Brazil, alongside a map of Israel with a heart in between. One corner of each flag was left for the children to inscribe personal messages. “The kids were working so hard to translate their thoughts from Spanish to Hebrew,” said Shemtov. They wrote “Yisrael echad,” the Jewish people are one, and more simply, “We love you.”

Fearing a shortage of horns for her shofar factory, Chabad of Uruguay’s representative Rochi Shemtov dreamt up the flag idea while visiting her children who are studying at yeshivas in the United States. The Jewish community in Uruguay is secular, but very Zionistic. Performing an act of loving kindness on a Jewish holiday for Israeli children, explained Mrs. Shemtov, "is a wonderful way to connect their love of Israel with love of Judaism.

"Many parents don’t realize that love for Israel is a natural outgrowth of one’s love for Judaism, and this kind of activity helps them make that connection."

In the hectic days before the High Holiday season, Chabad Youth Organization’s Terror Victims Project Director of Activities Rabbi Menachem Kutner was touched by the gesture. “It will surely bring much encouragement and joy for the orphans in Israel when they receive the flags for Simchas Torah,” said Rabbi Kutner. “This will prove once more that from all over the world, and from far-away Uruguay they are remembered and not forsaken.”

The flag event is one of the latest in Chabad of Uruguay’s new Jewish Kids in Action series. Every month, hundreds of students from Montevideo’s acclaimed Jewish schools participate in a Chabad-run learning experience. In a country that stands out among its Latin American neighbors for its high number of professionals per capita, the heat was on for Shemtov to produce programs that captivate the kids, impress their teachers, and intrigue their parents. “The way to reach people is through their children,” said Shemtov, “and the best organized system the children have are the Jewish schools.”

Discovering a new way to reach Uruguay’s loosely affiliated Jewish families is no longer an extra for Chabad of Uruguay. It is a must. In 2003, Uruguay weathered a devastating economic reversal brought on by Argentina’s economic collapse and Brazil’s troubles. Shemtov saw 5,000 Jews leave the city she’s called home for 21 years. First to go were the most upwardly mobile, the most affiliated, but Chabad does not run. After helping as many of the 15,000 Jews who remained, Chabad rebuilt. To reach the post-collapse Jews required new approaches and creativity. “In our forties, my husband and I had to start over again,” said Shemtov.

New approaches are gaining momentum. Chabad’s new Mommy and Me program is tailor-made for Uruguay’s professional moms. At 7 p.m. once a week, moms and their tots gather for music sessions with infant-music specialists who play Jewish tunes. Thirteen moms and their babies gather on a weekly basis at an enclosed hotel pool for a mommy-baby swim.

With flags flying high and babies splashing merrily, Chabad is rebuilding Uruguay so that its longstanding Jewish community endures – with meaning and mitzvot.