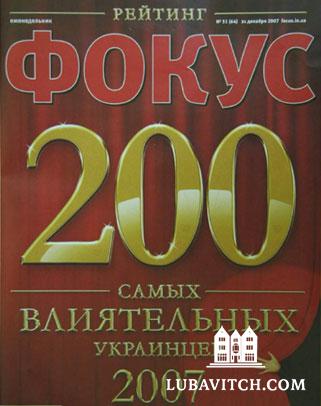 (lubavitch.com/lns) The latest, New Year edition of Focus Magazine, a Ukrainian publication, named Chabad’s Rabbi Shmuel Kaminezki, Chief Rabbi of Dnepropetrovsk, one of the 15 “powerful foreigners” in Ukraine. Rabbi Kaminezki was named along with US and Russian ambassadors said to seriously influence developments in Ukrainian life.
Also named in another Focus rating of the 200 most influential Ukranians were leaders of major financial and industrial groups, three of whom are members of Rabbi Kaminezki’s advisory board: Igor Kolomoisky and Victor Pinchuk took sixth and seventh positions in the Ukraine influence rating, and President of the Dnepropetrovsk Jewish community Gennady Bogolubov took the seventeenth place.
Rabbi Kaminezki is chief rabbi of the largest Jewish community in Ukraine.