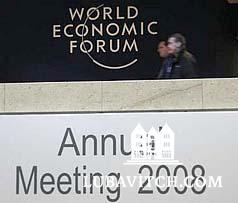 Chabad Rabbi Berel Lazar, Chief Rabbi of Russia, called on the participants in the World Economic Forum in Switzerland's Davos to take a strong stance against the use of religion for political purposes.

Speaking at the forum's session dealing with the religious aspects of economic and political affairs, Lazar pointed out that while most terrorists and many separatist movements try to excuse their actions by references to religion and quotes from holy books, religious leaders should publicly declare that any such attempts have nothing to do with true faith in G-d.

Religion has always promoted the ideas of peace, humanity, and respect for other people's rights, and all those taking weapons in their hands, not to mention those encouraging others to become suicide bombers, are international criminals, whom the community of believers should reject, Lazar said.

This is the sixth economic forum in Davos in which the Russian chief rabbi has taken part. Lazar first appeared at the Davos forum in 2003 among 37 other world religious leaders. He was then the only rabbi to take part.

This time around, President of the CIS Federation of Jewish Communities Lev Leviev is also taking part in the Davos forum. (source:Interfax)

Rabbi Lazar serves as a member of the World Economic forums council C-100; a community of business, political, religious, media and opinion leaders that promotes dialogue and understanding across different segments of society in the West and Muslim world.