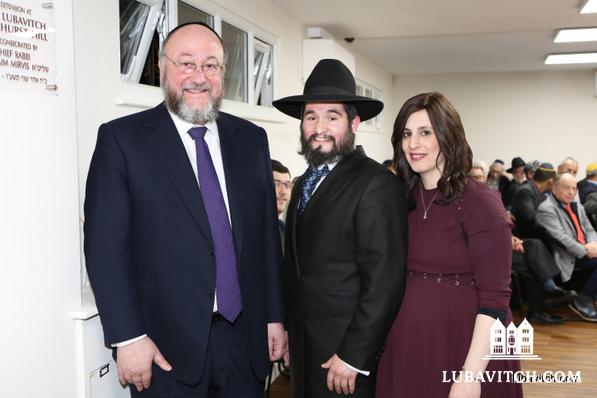 Chief Rabbi Ephraim Mirvis of the United Hebrew Congregations of the Commonwealth presided over the opening ceremony of Chabad of Buckhurst Hill, when they celebrated their expanded facilities last month.

Mirvis greeted guests and community members who came out to celebrate the dramatic growth of this community. Eleven years ago, Jewish families living in Buckhurst Hill, England had no real infrastructure to meet their religious and spiritual needs. That began to change when Rabbi Odom and Henny Brandman moved to the affluent suburban town in 2005. In the past eleven years since, they have reached 600 local families, providing them with social, spiritual and educational programs. As well, Chabad offers kosher restaurant nights and in-house catering, and draws more than 70 to its Shabbat services.

The fast growth of Chabad of Buckhurst Hill prompted three moves until most recently, they moved into new premises, a space five times bigger than their previous one. But when that became too small a short while later, they decided to expand.

A large multipurpose room will has been made accessible for people with disabilities, and allows for larger functions and room for more people to gather for services.