Chanukah Lights Will Illuminate Paris After All 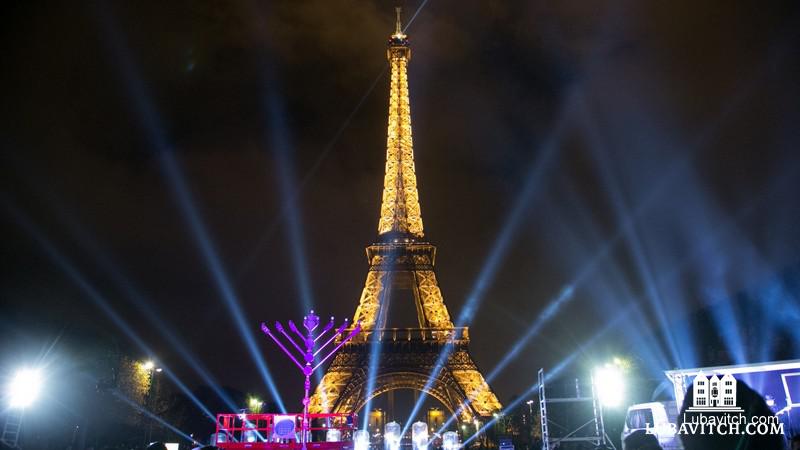 All News
By Rena Greenberg , Paris

Despite increased security fears, Chabad of Paris will go ahead with its annual public menorah lightings during Chanukah. Following a series of terror attacks in November, Paris police had discouraged local Chabad emissaries from conducting public Chanukah celebrations, and called for major lighting ceremonies to be canceled. Chabad had planned more than 60 celebrations and nightly public menorah lightings around Paris this year, with many designed for children, teens and young professionals.

In the weeks since the heinous attacks last month that killed and wounded hundreds, Paris police prohibited large public gatherings and events as a heightened security measure. With record-high levels of violence towards Europe’s largest Jewish population, some French Jewish leaders have expressed concerns. After the November terror attacks, extra police were installed to guard the historically Jewish Marais neighborhood in Paris, while a teacher at a Jewish school in Marseilles was stabbed by three attackers who appeared to support the Islamic State group.

But as a matter of principle, Chabad has always taken the position that shutting down its Jewish activities would be a capitulation to terror, a submission to darkness which the Chanukah lights are intended to dispel.

On Tuesday, Chabad delegates met with local officials to plan for safe and secure Chanukah celebrations. Although Saturday night celebrations and an annual traditional “Mitzvah Tank” parade were canceled by police order, police have agreed to allow 19 Chabad-led public menorah lightings to take place over the course of the 8-day holiday, under heavy security.

Once again this year, the large menorah at the Eiffel Tower that has lit up the French capital for the past 25 years, will be kindled against the Parisian skyline. The iconic lighting drew more than 6,000 Parisians, dignitaries and visitors last year. With Chanukah celebrations given the go ahead, thousands more will be able to join Chabad this coming week to celebrate the Festival of Lights in the City of Lights.

Related Articles
View All
Menorah: A Symbol of Religious Freedom
When the U.S. Supreme Court ruled that placing Chabad-owned menorahs in public spaces did not violate the establishment clause, it set a slab of precedent…
How Chanukah Came Out of Closet
The first public menorah went up in San Francisco’s Union Square, in 1975. Erected by the late Rolling Stones promoter and Holocaust survivor Bill Graham
Get Inspiration to your inbox!
Newsletter
Join our weekly newsletter for inspiration and updates
Donate
Find Your Local Chabad Center
Subscribe
|
Log In
Chabad
About Chabad-Lubavitch
About Chabad Lubavitch
The Rebbe
Headquarters
Magazine
Magazine
News
News & Updates
In The Media
Impact
Social and Humanitarian
Social and Humanitarian
Education
Education
Community
Community