Changing the Landscape of Jewish Life in the FSU 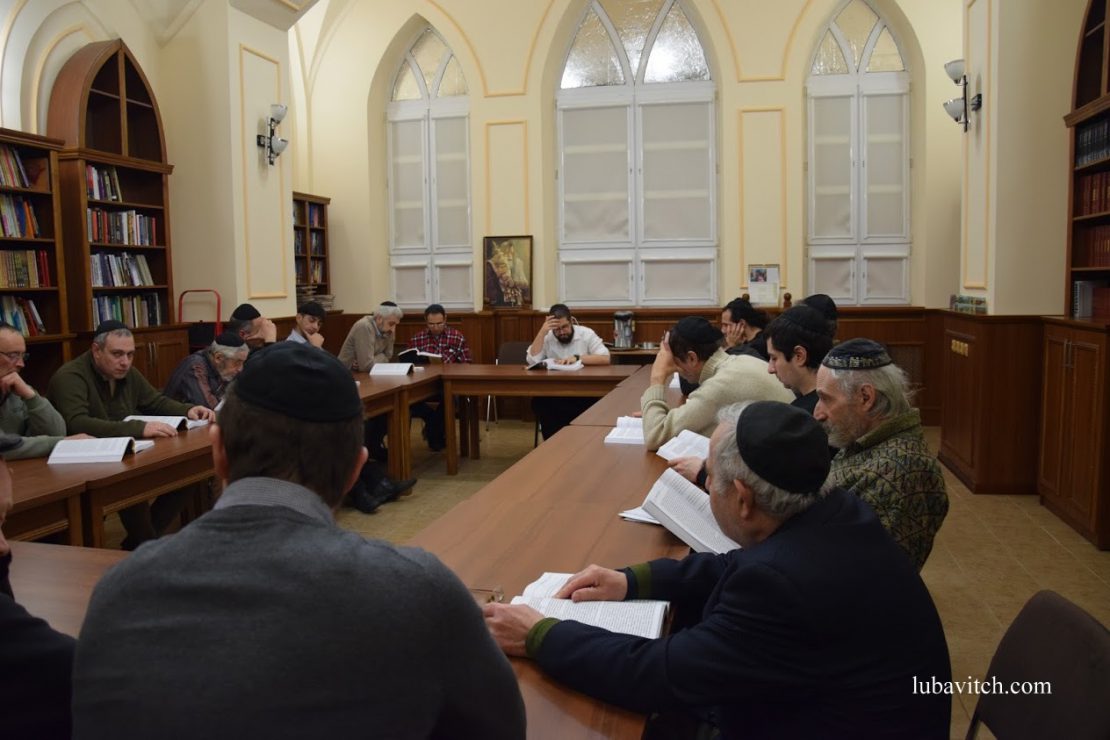 On Sunday, the Jewish community will celebrate the holiday of Shavuot, marking the Sinai revelation, when the Jews received the Torah 3,328 years ago. Now thousands of Jews, no longer under Communism’s hammer and sickle, can appreciate its meaning at a profoundly advanced level.

Kollel Torah, a dramatic initiative to disseminate Torah, brings advanced study to 19 countries in the Former Soviet Union and Europe. In 85 distinct cities, 1500 men meet daily for the study of Talmud, Jewish law, and Chasidic texts, while 960 women in 60 select cities convene weekly for intensive learning. As in the traditional kollel system, each participant receives a stipend and is expected to pass a test to ensure comprehension.

“We know that Chabad representatives are doing great things in their cities, holiday programming, schools for children, Shabbat meals, but organized learning was a challenge,” explains Rabbi Bentzi Lipsker of Petersburg, Russia. He joined forces with Rabbi Moshe Weber, his colleague in Dnepetrovsk, Ukraine, to design this systematic study system geared for adults. A team of rabbis in Berdichev prepares the texts, in Hebrew and Russian, so that each  kollel can follow the same curriculum. The 18th volume was delivered last week.

“We saw a real desire for learning in an authentic way, but until now, there was no framework,” Weber explains. We created Kollel Torah because we believe strongly that every person should have the choice, and the chance, to study Torah.”

Shimon Mitnitzky has been attending Kollel Torah in his hometown of Sumy, Ukraine, since October of 2014.

“The factory I worked in for 30 years was greatly affected by the war in Ukraine and they were slowly closing down and laying off workers,” he says. “At the same time the Rabbi asked me if I was interested to join the Kollel. I always thought that one day I would start coming to shul more often and now this was my chance.

“I wasn’t sure that the learning would be interesting, but after a few days I realized that I need more,” the 58-year old reveals. “I started asking questions and learning more, and that made me want to do more.”

For nine years, Rabbi Yechiel Levitansky struggled to get a minyan for Shabbat and holidays, never mind daily prayers. He would spend hours on the phone inviting people to come to Shabbat meals or holiday programs. After the war between Russia and Ukraine in the summer of 2014, the situation worsened. Seven families, the mainstay of his community, left for Israel. When he heard about Kollel Torah, he was eager to sign up, but concerned that he wouldn’t find the requisite 10 men needed to register. A month in, there were 12 regulars. These days, 20 men gather at 7:15 each morning for prayers and study. 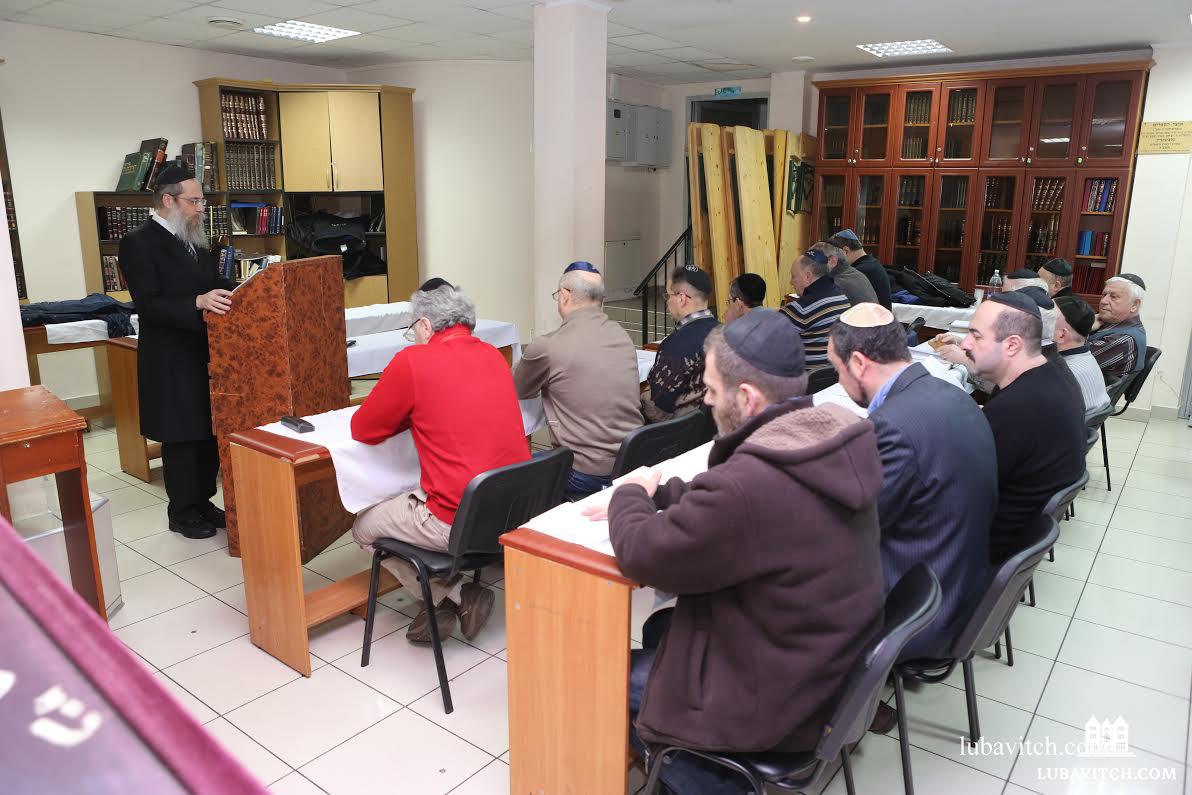 The men, between the ages of 21 and 65, come before work or university. “It looks like any shul in the world,” Levitansky says proudly. Over coffee and cake, “everyone has a chance to read the text and ask questions and we explain and discuss the various topics. Last year, when we learned the laws of Shabbat, it was completely novel. They couldn’t get enough of it.”

“Kollel Torah has literally transformed my people, my city, and me,” says Levitansky.  “These men didn’t know each other before, but we are now a real club.” People flock to his events and for the last 18 months, there has been a minyan every Shabbat and Jewish holiday. The new-found connections run deep. Two men became business partners after meeting at the Kollel and one member, a surgeon, has helped many people with medical matters.

Initially, one of the big motivations to join was the stipend. In Sumy, where the economy has floundered since the war, the 2,000 hryvnia monthly salary can be a significant part of a person’s income, even more so for the Kollel members who are currently unemployed. The equivalent of $80, the funds can go far in terms of electricity and food bills.

Or they can be used, as they often are, for something far more inspired. In Mitnitzky’s case, he uses his money for spiritual gains.

“I bought my own Mezuza for my home and almost have enough saved for my own Tefilin,” he declared with satisfaction. “Last year I finally had a Bris and am proud to be a complete Jew.”

Mohels who perform traditional circumcisions have reported a 200% hike in brisses since the Kollel’s start in late 2014. The same period has seen  60 kosher weddings of Kollel participants. In its second year, all participating cities claim daily minyans.

When women saw the tremendous gains their husbands were making, they too wanted in. A parallel program was devised and now almost 1,000 women study in 60 cities around the continent.

In Kharkov, Ukraine, 35 women meet in the shul’s library every Thursday from 5:30-6:30, on their way home from work. The study material, prepared by the Rohr Jewish Learning Institute, covers the weekly Torah reading and thematic elements therein. “The women have different levels of Judaism and different backgrounds, and the diversity works really well in discussions, our conversations are very stimulating,” Miriam Moscowitz, the group’s leader says. The women’s kollel in Kharkov is so popular that there is a waiting list to join a second, parallel group. “They have made changes in their lives,” she shares. “Many women have taken on Jewish names and begin their day with ‘modeh ani’ [the prayer thanking G-d for another day].”

The stipend in the women’s kollel is generally given as a coupon to be used in the kosher store or for Jewish preschools. Depending on the local economy, and an individual’s financial status, many men and women return their pay envelopes, unopened.

The Meromim Foundation, headed by Lipsker in Petersburg, funds the organization. Last year, a Charidy campaign motivated 3,000 donors to help them raise 30 percent of their annual budget. This Tuesday, Lipsker hopes their new campaign will be supported by 5,000 people around the globe.

“We aren’t making a bigger Shabbat or a more creative holiday program,” he says. “We are bringing people to the synagogue, teaching them Torah. We are making real changes in real people’s lives on a daily basis.