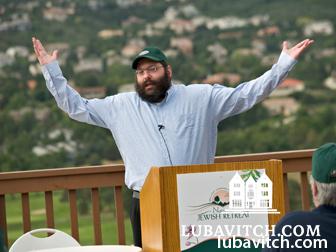 (lubavitch.com) The world’s most comprehensive adult Jewish education program will host the fourth annual National Jewish Retreat this August. The Rohr Jewish Learning Institute will present a plethora of Jewish ideas over five days at the Hyatt Regency in Greenwich, Connecticut. Of the 400 expected participants, some arrive with little Jewish background while others have completed a formal yeshiva education. With dozens of sessions to choose from, there is literally something for everyone.

Amongst the 30 featured speakers are Senator Joe Lieberman, Connecticut’s Attorney General Richard Blumenthal, noted historian Dr. Jonathan Sarna, and NYU professor Lawrence Schiffman. Dr. Schiffman, chairman of the Skirball Department of Hebrew and Judaic Studies at NYU and a distinguished authority on the Dead Sea Scrolls. He will speak about “Israel, the Dead Sea Scrolls, and the Jews,” a topic, he says, that is “quite relevant to the modern Jewish student.”

“On a simple level our knowledge of Jewish history is part of our identity—of our past, our present, and our future. But specifically, we can learn from this period in history: about the relationship of religion to the government; themes of Moshiach; the overall issue of sectarianism in Judaism; as well as the extent to which a person should separate from Jewish law.”

Visiting students will also have the benefit of lectures by Rabbi Manis Friedman, Rabbi Yossi Jacobson and Chasidic feminist Rivkah Slonim. They’ll pack in ideas metaphysical from the Tanya, organ donation in Jewish law, and a Talmud class before lunch and return to the lecture halls for an afternoon of American Jewish history, Kabbalah and film, and life after death.

Come August, Dr. Peter Pflaum will pack his bags at his Newport Beach, California home and, for the fourth time, fly to the retreat. By now, he says, his participation is a given. “I first heard of the retreat from a Chabad rabbi I study with,” he says.

“I attend a lot of Jewish education courses and no other place in the world offers such broad exposure to so many different subject matters in such a friendly and dynamic environment. “They offer so much, in such a short period of time. It is chicken soup for the soul.”

Rabbi Heshy Epstein is on the Board of Directors of JLI and is passionate about his chairmanship of the Institute’s summer retreats. “The Lubavitcher Rebbe always said that we can change the world through education. How can we raise a new Jewish generation? Through motivating and compelling people—and that is achieved through teaching them.”

JLI instructor Rivkah Slonim believes that the Institute “brought Chabad’s philosophy to a whole new level: one’s passion can only be achieved through study.” Chabad’s representative to Binghamton University is no stranger to the lecture hall and she is particularly excited about attending this year’s retreat for the first time. “I love to teach. I always look forward to teaching people who want to study. And, of course, I plan on learning from them as well.”

Text-based it may be, but the week’s goal is to take the lessons beyond the book and into the students’ everyday lives. Heavier classes are book-ended by hands-on workshops such as challah baking, scribal techniques, and tips on how to run a traditional Shabbat meal or pray from a siddur. Jewish films, Chasidic art exhibits, and a rousing concert will round out the experience.

“Personally,” says Epstein from his South Carolina home, “I am looking forward to our mini study hall, which will be equipped with texts and rabbis for one-on-one learning opportunities. I am also excited about our mock beit din (Jewish court of law in which several prominent rabbis will take us through modern day cases through the lens of Talmudic thought.”

“I feel like I am back in school again,” laughs Pflaum, “without the intimidation of having to complete tests. It is five days of warmth, education, and community.