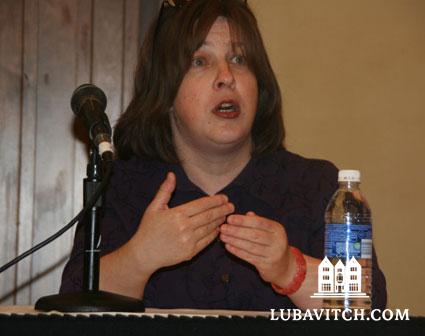 (lubavitch.com) Now that the votes have been counted and barriers have been shattered on one front, will 2012 be the year of the woman?

Women who lead Chabad on Campus centers have their own way of preparing this generation’s up and coming women to take on community leadership roles. They’re leading by example.

In contrast to other religious organizations where the percentage of women in leadership positions hovers between 10 and 20%, according to University of Arizona sociologist Mark Chaves, 50% of Chabad on Campus centers leaders are women.

When the Chabad House at the University of Virginia was selected to host a Sinai Scholars program on campus, Channa Mayer and her husband, Rabbi Shlomo Mayer, both co-directors of Chabad House, divvied up course work. She teaches the concepts, he the texts. This winter, Mrs. Mayer will be leading a Birthright Israel ten-day tour of the Jewish homeland for her students. Her dance card is filled in between now and then with classes to teach, discussions to lead and emergency counseling sessions all vying for her attention. She and her husband are partners in their venture to bring Jewish continuity out of the catch phrase and into reality.

“Everyone has a responsibility to bring Jewish people to their heritage,” said Mrs. Mayer, who’s known for her ability to cut to the heart of an issue, just as she dissected specimens while working for her biology degree at NYU.

Leadership means the juggling of many responsibilities at Chabad Jewish Center of Penn State University, where Sarah Meretsky co-directs campus activities. For the local community Mrs. Meretsky leads a Jewish women’s circle, directs a Hebrew School and homeschools her children. To this she added a Jewish women’s study session on Friday nights, in between candle lighting and the Sabbath meal.

Students “see my busy life as similar to theirs, in terms of having a lot of commitments,” said Mrs. Meretsky. It’s a perspective she can understand having been engrossed in busy college life while working on her degree in biology from Brandeis University. “One thing [students] are learning is the power of the Jewish woman to stay focused while so much else is going on. It’s a characteristic that differentiates our relationship with G-d from a man’s.”

Taking a leading role also means having your own style, according to Aviva Spiegel, an alumna of Stanford University, now co-director of Chabad House Jewish Student Center at University of Oregon. Mrs. Spiegel, an artist, gathered a creative community of women together for a night of art and expression at a local gallery space last year. She hosts Torah classes in a local coffee shop, finding its caffeinated and open atmosphere conducive to thoughtful discussions.

Doing what comes naturally to a Chabad representative runs counter to the stereotype of a traditional orthodox Jewish woman. For years when students called to ask questions, they asked Chana Silberstein, PhD., to put her husband Rabbi Eli Silberstein on the phone.

“Once I got my doctorate, that changed. Suddenly students wanted to speak to the rabbi or the doctor,” said Dr. Silberstein, whose doctorate is in developmental psychology. “I think often people come into a situation with their own preconceptions, deciding anyone who chose to have more than 1.3 children must not have any interests beyond the kitchen.”

Case in point: a recent issue of New Voices, an independent magazine for Jewish college students. Editor Jonathan Nathan-Kazis wrote “One message of a Friday night dinner at a Chabad House is that the role of the Jewish woman should be confined to making dinner.”

Mrs. Meretsky says she and her husband share the load. “If I am putting the children to bed, my husband serves the food. Our goal is to make sure it gets done. It’s not about roles. It’s more about practicality.” Raised in Omaha, NE, with three older brothers and no sisters, Mrs. Meretsky is not shy about setting male students right if they joke about letting women do ‘women’s work.’ “I tell them, ‘That’s not how it works in our house.’”

Jonathan Neff, a senior at Penn State from Ardmore, PA, vouches for the egalitarian nature of the Shabbat experience at Chabad. “I’ve cleaned and swept and mopped, and I don’t find it emasculating. I don’t find a gender barrier here when it comes to chores.”

Spending time in the kitchen is no assault in a woman’s selfhood. What goes on in the kitchen is important, even beyond the heart to heart talks that often take place in there between Chabad representatives and students, according to Dr. Silberstein.
“One of the messages of the Chabad House dinner is that caring for people, serving people is no less a G-dly pursuit than making kiddush or reading the Torah.”