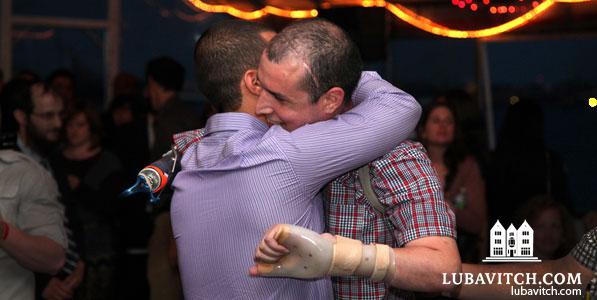 (lubavitch.com) On Sunday, June 6, Rabbi Uriel and Shevy Vigler welcomed ten Israeli soldiers to the Chabad Israel Center of the Upper East Side. All ten were wounded in combat and arrived to New York together with Rabbi Menachem Kutner director of Chabad Terror Victims Project who organized this program jointly with the Chabad Israel Center. The trip Belev Echad, “With One Heart,” which will take the soldiers on a 12-day tour through New York, Washington, DC and Niagara Falls.

Daniel Rosen, a long-time friend and supporter of the Chabad Israel Center, told Lubavitch.com that the community is “privileged to host these young gentlemen” as their guests and was grateful for the opportunity to “thank these veterans for their service and sacrifice.” Indeed, Chabad Israel Center of the Upper East Side raised $100,000 to organize and sponsor the unusual program.

“More than what we have done for the soldiers, they have already done for us,” Rabbi Vigler said.

Ben Spitzer of the Golani Unit 13 was wounded during Israel’s invasion of Gaza in 2009. Spitzer’s injuries are among the most severe in the group. His arm was amputated and he spent 11 months in hospitals, undergoing seven surgeries. Only recently sensation in his left leg returned, enabling him to walk once again.

Spitzer is in rehabilitation at an outpatient clinic, where he will continue therapy upon his return to Israel next week. He routinely undergoes physiotherapy, hydrotherapy and occupational therapy in order to re-activate affected parts of his brain. For the duration of this trip, he requires two full-time attendants; one is his father, Ophir Spitzer.

Lubavitch.com caught up with the elder Spitzer on a cruise honoring the soldiers. “Ben always needs help that’s why I am here,” he said. The cruise set sail on Tuesday evening, June 8 for a two hour ride in the Manhattan Harbor with nearly 450 people on board.

A highlight of the action packed tour, the cruise was made possible thanks to the generosity of long time supporters of Chabad causes, Steven and Orly Salsberg. “We always enjoy utilizing our boat for charitable causes” said Mr. Salsberg “but this event was special, giving us the opportunity to honor these 10 real-life heroes.”

Amy Becker, an elementary school teacher in the Bronx who lives on the Upper East Side was honored to meet with the Israeli soldiers. She was thrilled to be able to thank them for their dedication to Israel and to show that they are appreciated “not only by Israel, but by Jewish people all over the world”

Aboard the ship, Fred Kreizman, the Jewish Liaison for New York City Mayor Michael Bloomberg said that it is “very important, especially during these tough times, to come out show our support for Israel and her soldiers.” Kreizman was impressed with the Chabad Israel Center’s ability to draw young Jewish people from all different backgrounds. “The achdus, the unity, is simply amazing” he said smiling.

Wounded former officer, Yogev Lahav of the Givati Brigade expressed his gratitude to the Viglers and their community. “It’s heartwarming to see how the Jewish people in America stand with us.”

Lahav was hit numerous times, with three bullets piercing his stomach and another two hitting his right leg, during an attempted capture of a terrorist outpost in Shechem. He spent six unconscious weeks in the ICU at Beilinson Hospital in Petach Tikva. After being released from Beilinson, Lahav entered eight months of rehabilitation at the Tel Hashomer Hospital in Ramat Gan. To date Lahav has had eight major operations and countless minor ones.

“It is our duty, and even more so our privilege to serve for our land, but now, during treatments from injury, we very much appreciate the opportunity to take a quick break,”  said Lahav. “The people of Chabad Terror Victims Project are always there to give a hug and offer both mental and physical support to victims and their families.“

Rabbi Menachem Kutner of the Chabad Terror Victims Project explains that his team is “involved from the moment an injury or terror attack takes place until they no longer need us by their side – whether that’s a week, a month, a year or even several years.” The organization helps wounded soldiers and victims of terror around Israel, and operates with the assistance of Chabad’s 250 centers across the Jewish state.