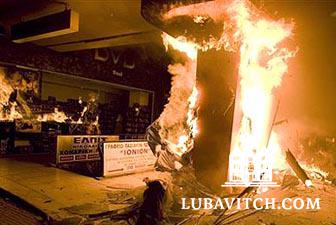 Dec. 8: Shops set on fire by rioters are burning near Omonia Square in the center of Athens as riots went on for a third day in the Greek capital on Monday. Gangs of rock-throwing youths made sporadic attacks on police stations across Athens, stoned the Interior Ministry and clashed with riot police outside Parliament on Monday in a third day of violence protesting the police shooting of a teenager.
Photo Credit: AP/FNS

(lubavitch.com) After four days of widespread rioting that has brought the country's infrastructure, from transportation to banking and hospital services to a grinding halt, Rabbi Mendel and Nechama Hendel of Athens, are working to maintain calm and to continue its programs and services within the Jewish community. “Chabad’s programs and activities will continue,” he says resolutely.

The Rabbi, who says that this is the worst violence he has seen since his 2001 arrival, is located at the center of the action. “The main riots are around the corner from my house,” he says. “From my window I can see cars and garbage burning, people breaking into stores, and rioters fighting with the police.” Hendel said that his children were scared when nearby explosions rocked their home Sunday.

The violence started Saturday when a teenager was shot and killed by a local policeman. Though the government was quick to charge the officer with manslaughter, thousands have hit the streets hungry for a fight. Clashes between anarchist students and the police force are nothing new here, particularly because officials are usually slow to respond. But this time the violence has escalated more rapidly more fiercely than in the past.

The rioting has been enormously destructive as a young generation, frustrated by the bleak economy, give vent. But Nechama Hendel wants to learn from the raw power of the young. "Channeled in the right directon," she says, "youthful energy can change the world for the better. Left to its own devices, it can destroy everything in its path."

The Hendels are always on the lookout for positive ways to harness that energy towards productive ends. Much of Chabad’s programming is designed to engage the local youth who comprise a good portion of the 5,000-strong Jewish population in the country. Teenagers here enjoy regular classes and programming geared to their interests. They also participate in diverse volunteer options.

Leon Mizan an Athens native whose business was disrupted in the riots, says Chabad offers a meaningful outlet for youthful impulse for change and progress. “Not everyone can be a Rabbi,” he considers, “but each of us needs to be involved in order to ensure the continuity of our people.”

Through Chabad, Nizan takes an active role in reaching out to others, delivering holiday food packages, directing children's programming on Shabbat, and assisting in many ways with Chabad's outreach activities. Creating opportunities for the young generation to invest themselves this way, says Rabbi Hendel, is critical to ensure that they feel part of the community and have a positive focus.

Despite the unrest, Chabad of Greece has just purchased a large building in the center of town and the Hendels are optimistic about the future of Jewish life in Greece.

With a restaurant, a library and a meeting place in the new building now under renovations, Chabad “will finally have enough room for all of its activities,” says an energetic Hendel. The remodeled structure will be ready for the busy summer season, when the thousands of Jewish tourists to Athens flock to Chabad.

This past Shabbat, a week after the infamous massacre at the Mumbai Chabad House, an unusually large crowd turned out at the Athens Chabad center. “People are searching for a connection now,” says Hendel. “And they are finding it here.”

Rabbi Hendel hopes that the civil unrest will dissipate soon. “We plan to celebrate Chanukah with light and religious freedom.” With the help of dozens of young volunteers, Chabad will deliver candles to each of the 3,000 Jewish homes in the city and help bring light to the world.

It is why the Hendels moved to Greece in the first place.