Chabad to Open on the Greek Island of Rhodes

Popular with Jewish travelers, the island’s Jewish quarter dates back to the Middle Ages 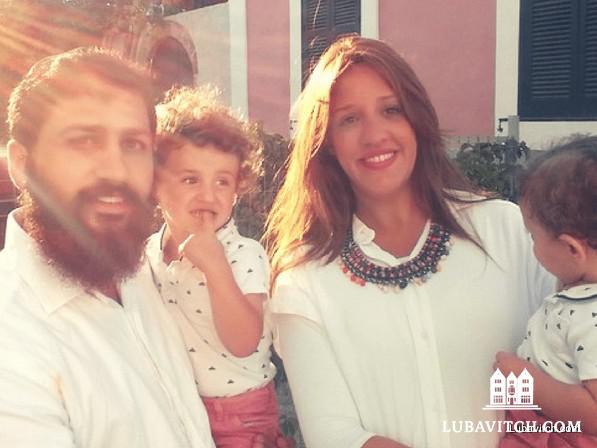 Rabbi Uri and Devorah Leah Medina together with their children.

With perfect weather year round and a Jewish quarter dating back to the first century, Rhodes is one of Greece’s most popular tourist destinations. Last year, the island saw more than 150,000 visiting Israelis, and come March 2017, they and the island’s small Jewish community will have a Chabad center all their own.

In recent months, Rabbi Uri and Devorah Leah Medina have been visiting the Island, learning the landscape and getting to know its people before resolving to settle there. When tourists heard that the Medinas were coming to town, they began calling to inquire about kosher food options.

“I discovered that while many Israelis are not strictly religious, they struggle to maintain a kosher diet even when traveling overseas.” In places like Thailand and India, other highly-popular Israeli tourist destinations, Chabad is sought out for the affordable kosher options it offers. Uri and Devorah Leah started frying schnitzel and baking potatoes in their small apartment kitchen. The nominal offerings were snapped up by Jewish tourists faster than they could prepare them. “Fifty, seventy, one hundred people – our phone quite literally did not stop ringing and we quickly surpassed our capacity,” says the young rabbi. The Medinas invited callers to join them for Shabbat meals.

One thing led to another and Rabbi Mendel Hendel, Chabad’s chief representative to Greece based in Athens, helped the Medinas to secure a permanent three-story Chabad center with a commercial kitchen and room for a restaurant. It seemed a necessary first step.

A Draw for Jews

In 2010, after the famous flotilla incident damaged the relationship between Israel and Turkey, Israelis scrambling for cheap vacation alternatives nearby made their way to the Greek islands in the Aegean Sea, and in particular, to Rhodes, which is southeast of Athens off the Anatolian coast of Turkey. A one-hour flight from Ben Gurion Airport, the sun-drenched destination has great historical and archeological interest. The oldest synagogue in Greece,  Kahal Shalom Synagogue, established in 1557 still stands in the Jewish quarter, now more as a tourist attraction than a functional synagogue.

Greece’s Tourism Minister Olga Kefalogianni says that Israeli tourism to Greece is also helped by Greece’s promotion of the country’s many Jewish heritage sites. “Jewish communities flourished in Greece, and you can see remnants of this presence in cities, first of all in Salonika, but also in other places, such as my place of origin in Crete.”

Rhodes hosted a large and active Jewish community prior to World War II, but the majority were killed or dispersed by the Nazis. Only about 40 local Jews remain on the island today.

This past Rosh Hashana, Rabbi Medina rented the largest hotel on the island, Rodos Palace, for the overflow High Holiday crowd of about 250. On Yom Kippur, when most Israelis return home to spend the day in synagogue with their families, Medina coordinated a special joint service in the ancient synagogue with the local Jewish community. The synagogue’s administrator told the rabbi not to bother, as the congregation could not normally get a minyan for the sacred fast day. Medina insisted that the prayers would proceed with a minyan. More than 80 people showed up.

The Rhodes Chabad House is the fourth to open in Greece, after the larger ones in Athens and Thessaloniki, and a seasonal one in Crete. Five hundred daily visitors are expected at the Chabad House this summer during high tourist season. But Medina is not daunted by the large responsibilities ahead. “It is such an exciting time because there is such a demand for Jewish life here,” he says. The Medinas are moving ahead with plans to open a full-service kosher restaurant as well as synagogue prayer services and Torah classes. Building a local mikveh and founding a Jewish children’s preschool are also in the works.