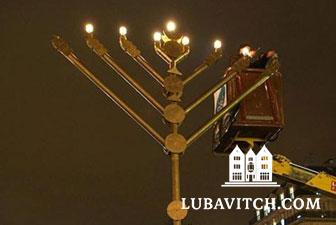 When Jewish substance abusers in recovery receive permission to light up, it’s usually a cigarette – one of the few vices allowed in treatment centers – they think of.

Lighting a Chanukah menorah, however, is off-limits for safety reasons in the centers, but not at the renowned Caron Treatment Center. A close working relationship that Rabbi Yosef Lipsker, a Chabad-Lubavitch rabbi with a pulpit at Shomrei Habrith in Reading, PA, has with the Caron Center has brought Chanukah [this year beginning December 4 at night] light to Jewish men and women facing their darkest days.

“Chanukah was always a big deal in my house. We always lit and sang songs, but it did not mean so much to me spiritually,” said Talya W. who entered Caron shortly before Chanukah last year. Now sober for nearly a year and counting, Talya spoke with Lubavitch.com of the aching loneliness she felt watching everyone else prepare for their festivities. “I was so lonely. I only had Chanukah and everyone else had a big holiday.”

Then Rabbi Lipsker came on his near-daily rounds at Caron. He’s a familiar face there, popular with Jewish and non-Jewish clients and staff alike. He and his wife Chana Lipsker host a table full of Caron clients for Friday night dinner each week. With Rabbi Lipsker’s advocacy, Caron has also accommodated women who wish to light Shabbat candles during their detox and recovery periods.

Lighting Chanukah menorahs at Caron brought out the full spectrum of Jewish clients, those who crave a chance to fulfill the holiday ritual and those “who would not come for Friday night, who are not comfortable with religious observances, but can identify with Chanukah,” said Rabbi Lipsker. Last year, he estimated, two-thirds of the 45 at the lighting were not Jewish. It was a boon, he said, “to the Jews who are very sensitive and worried they will not fit in. Having all types at the lighting made it a cool thing, it neutralized their hesitation to join.”

Talya is grateful she made it to the lighting that Chanukah. “I remember seeing Rabbi Lipsker light the candles. I was always crying, but it was so reassuring. I knew was going to stay sober, and I was going to do it, and the Lipskers would be there for me.”

Since when do Jews turn up in drug and alcohol addiction treatment centers? Since there were treatment centers. Substance abuse in the Jewish community is creeping out from under the rug of denial. In an important study conducted by Jewish Alcoholics, Chemically Dependent Persons and Significant Others (JACS) in 2001, self-identified substance abusers described themselves as Orthodox – 10%, Conservative – 28%, Reform – 32% and non-affiliated – 30%.

The findings, published in the Journal of Addictive Diseases that year, revealed that 83% of those who sought help from the Jewish community for their problems received “little or no help at all.” This has to change, said Rabbi Lipsker. “Eighty million Americans are affected by substance abuse – either it’s them or someone they have a relationship with. Just like Chabad houses are bringing out more rabbis especially to head their youth programs, there is a need for recovery rabbis.”

This Chanukah, Talya said she has much to celebrate – her sobriety chief among them. But she’s planning on going to the Lipskers anyway. “Maybe I can help them help other Jewish kids go make it through, because I know it is tough.”