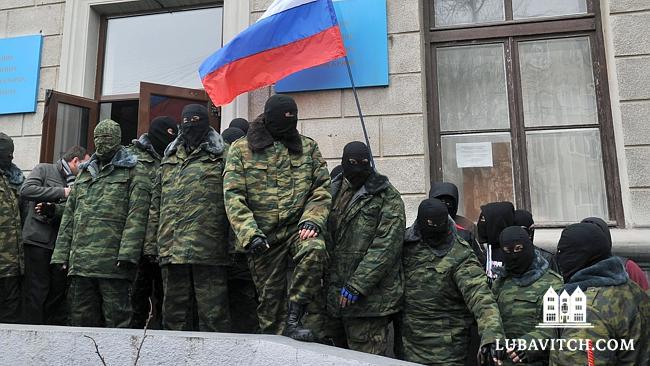 The night before armed men in unmarked combat fatigues took control of Simferopol, capital of the semi-autonomous Crimean peninsula, Leah Lipszyc knew something was wrong. During the day some 30,000 protesters had clashed in the square kitty-corner to their synagogue, throwing paving blocks and trampling two people.

“We never expected anything like this to happen,” Leah, the Chabad-Lubavitch representative to Crimea with her husband, Rabbi Yitzchak Lipszyc told lubavitch.com. “Even when the situation in Kiev escalated, we felt we were safely in the farthest possible place from it all. Suddenly, though, we were at the epicenter.”

Simferopol, with a population of 340,600, mostly ethnic Russians, Ukrainians and Crimean Tatars, is home to some 13,000 Jews. Though small in number, Crimea’s Jews have deep roots in a city renowned for its ethnic diversity; Jewish settlements can be traced back to the regions rule under the Greeks in the first century C.E.

But when Russian tanks rolled into the “City of Usefulness,” Leah, whose husband was in the U.S. at the time, contacted representatives from other Jewish organizations, but found their response frustratingly slow.

In the meantime, her husband booked a ticket to return, but it was too late. Her children were frantically calling from abroad, asking her to leave.

Rabbi Lipszyc’s flight was pushed off multiple times, and by the time he did manage to land in Moscow, Russian soldiers had taken control of the airport in Simferopol. He wouldn’t be able to fly into Crimea.

After consulting with Rabbi Yehuda Krinsky of Chabad Headquarters, Leah was instructed to leave Simferopol.

“The city was in chaos,” Leah recalls. The airports and the roads were closed and the banks went into a freefall.

“Everyone began to pull out their money at once. To prevent a collapse, the banks put a cap on how much could be taken out each day – about $110.”

Rabbi Mendy Sharfstein of Chabad Headquarters in NY connected Leah with Chabad emissaries deeper in Ukraine. who suggested that a car from Kherson could make the trip to Simferopol and pick her up. Unsure though that even if the car would be let into Crimea, it would be able to leave, Leah determined that her one chance to leave was by train.

“I grabbed whatever possessions came to hand,” Leah says, “My iPad, camera and a few hastily packed items of clothing, and went to the train station.”

The only train still leaving that night was to Donetsk. A friend managed to purchase the last two tickets for her online, while her husband also re-routed his ticket there.

Some 340 miles away and located on the Ukranian mainland, Donetsk, was a different world.

“Over Shabbos we spoke to people there about the situation in Crimea,” Leah says. “No one could believe that the turmoil would spread to them. Now there are clashes in Donetsk as well.”

Since arriving last week in New York, the Lipszycs have set up temporary headquarters in Brooklyn, directing their staff still stranded in Simferopol from abroad.

“There’s so much propaganda in the media, it’s difficult to figure out what exactly is going on,” Leah says. “If the reports would be taken literally, you have Nazis on one side and Communists on the other. There’s a lot of confusion.”

But while locals struggle to keep a semblance of normal routine amid the chaos, Leah remains optimistic about the future.

“Before we left, there were a few minor anti-Semitic incidents,” she says. “However, most people feel that this is their home, their community. They’re not leaving. Right now our greatest concern is their security—we are working on installing guards and surveillance equipment for the synagogue and other community buildings.”

While on Monday the breakaway Crimean government applied to join Russia following a weekend referendum to leave Ukraine, Leah remains focused on her community.

“Our current challange is to bring Passover products to Simferopol, including a shipment of kosher meat that’s been held back at the border, Leah says. “Suddenly finding that your city is in a different country offers a host of new troubles, but we trust that the situation will soon stabilize and we will be able to return to our community.”