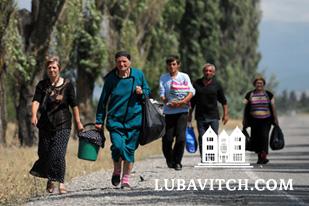 (lubavitch.com) Amid panic and worry, Georgian Jews were scrambling for papers and visas at the Israeli embassy, or were at the airport securing a place on one of four flights evacuating Jews to Israel on Tuesday.

Speaking with lubavitch.com over the din at the Tbilisi airport, Meir Kozlovski, Chabad representative to Georgia said that of the 1400 Jews who would be on those flights, about 200 are local Georgians. The rest are either Israeli tourists, or residents holding dual Israeli and Georgian passports.

The Israeli embassy sought help from the Chabad representative in drawing up lists of all the Israeli backpackers in Georgia, and contacting them with information about instructions for returning to Israel. With the exception of one group which is traveling deep in the Caucasian mountains and will stay put for the time being, Kozlovski said all were accounted for and will be evacuated to Israel.

“Israeli backpackers typically register with us when they arrive here, so we had good contact information and were able to reach them.”

Among the local Jews, however, there is panic and pressure. Jews from Gori—near the border of South Ossetian which was heavily bombed by Russian warplanes on Tuesday with civilian casualties—basically “fled with the clothing on their backs."

About 1000 Jews in all have reportedly escaped Gori, Koutaisi, Batumi, Akhaltsikhe and other cities for Tbilisi, which remained relatively quiet.

One new refugee leaving to Israel with her children, did not know whether her husband, who remained in Gori, was alive. “He refused to leave Gori, wanting to protect his home, and now we have no way of knowing what his situation is,” Kozlovski said.

Rabbi Kozlovski told lubavitch.com that he will be leaving later Tuesday for Israel with his wife and children, but with Russian orders to end the military operation in Georgia, he expects to return shortly.

“I’m sure that the situation will calm down very soon,” he says.