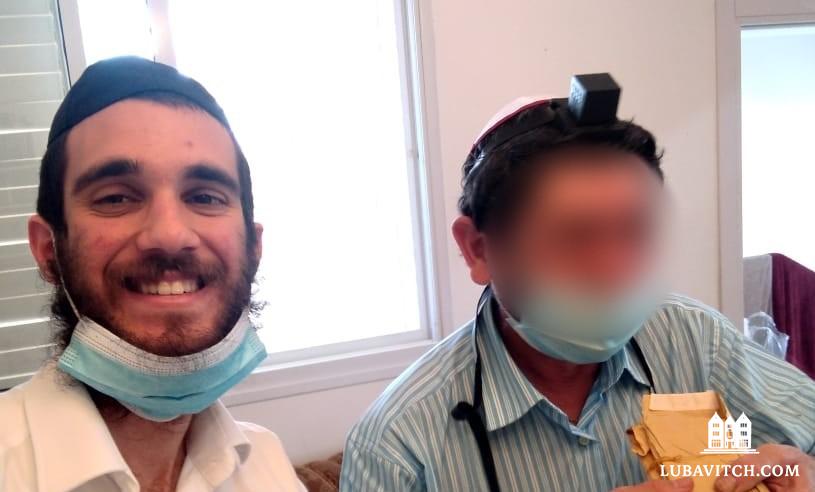 Rabbi Mendy Yitzchaki stuck his hand deep into the couch last Thursday in search of his daughter’s missing earring. Nestled in a crack was a stash of dollars and euros totaling approximately 100,000 NIS, roughly the equivalent of $25,000.00. Yitzchaki was stunned.

Last August, Rabbi Yitzchaki and his wife Gitty moved to the biblical city of Beer Sheva, where Abraham dug wells to uncover life-giving water. When the Chabad representatives rented an apartment in the south of town, their landlady left the old couch telling the couple that they could keep it or dump it. As far as she was concerned, the sofa was of little value.

After discovering the cash, the rabbi called the landlady, who now lives in an assisted living facility. When she told them she knew nothing of the secret cache, he reached out to her family. Yitzchaki was fulfilling a mitzvah that requires one to return lost goods to their rightful owner. “It simply isn’t ours.”

Dazed by news of this find, the family visited their mother’s rented apartment. Confirming the rabbi’s call, a fortune in savings greeted them. “Both my parents are Holocaust survivors,” Yosef, her son shared. “When I told my mother all that happened, she said, she didn’t know that there were still such good people in the world. She was in the ghetto for four years, my father was in a concentration camp.”

The money had been scrimped together for decades from reparation payments, a gift that Yosef’s dad, who died three years ago, had been setting aside for his wife and descendants. Towards the end of his life, with his memory failing him, he never revealed the bills he had hidden in the couch. The money was discovered providentially, says Yosef, at a time that his mother needs it.

Asked why he didn’t think to keep the money he found, the rabbi explains: “The money was left to the family by the elderly woman’s husband. It was the family’s inheritance, and rightfully belongs to them.” But the rabbi took his reward in the form of another mitzvah: wrapping tefillin with Yosef.

“Judaism teaches that honesty and integrity are more prized than all the money in the world.”

Chabad of Beer Sheva is directed by Rabbi Zalman Garelik. Rabbi Yitzchaki moved to Beer Sheva under the auspices of the Kollel Torah Shlaima – Keren Meromim.

Related Articles
View All
Humanitarian
Flying Food To Canadian Flood Victims
When unprecedented flooding cut thousands of British Columbians off from food supplies, Chabad of the Fraser Valley wanted to help
Humanitarian
Chabad Rushes Water and Warm Clothing to Tornado Victims
Chabad emissaries in Kentucky are leading an effort to supply clothing, food, and water to devastated victims of the deadliest tornadoes in recent memory.
Humanitarian
If the Shirt Fits, Pass It On
Cancer patients are already finding support, financial assistance, home-cooked meals, and even wigs at The Circle of Hope center in Merrick, Long Island. Now, they’re…
Humanitarian
Turkey Dinners For Park City Homebound
It’s the day before Thanksgiving and the kitchen at the Bistro Kosher Deli in Park City, Utah is bustling. A team of volunteers, dressed in…
Get Inspiration to your inbox!
Newsletter
Join our weekly newsletter for inspiration and updates
Donate
Find Your Local Chabad Center
Subscribe
|
Log In
Chabad
About Chabad-Lubavitch
About Chabad Lubavitch
The Rebbe
Headquarters
Magazine
Magazine
News
News & Updates
In The Media
Impact
Social and Humanitarian
Social and Humanitarian
Education
Education
Community
Community