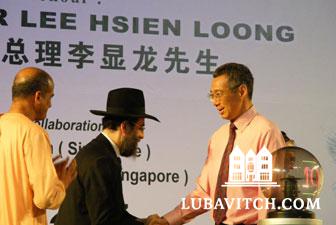 Representatives of the world’s religious faiths joined in a universal prayer for world peace formulated specifically for this event.

Representing Judaism was Chabad’s Rabbi Mordechai Aberjel of Singapore. Following the joint prayer, each representative was invited to offer his/her own faith-specific prayer for peace.

In his traditional dark hat and suit, Rabbi Aberjel recited a Jewish prayer dedicated to the well-being of Singapore’s government, and then in Hebrew, he blessed the entire conference with the traditional birkhat cohanim, the priestly blessings, followed by an English translation.

The IRO is dedicated to “religious harmony through mutual tolerance, confidence, respect and understanding,” says its website. Every year, it selects a representative of a different religion to serve as its honorary president.

This year, the honor went to Mr. Joey Benjamin, president of Singapore’s Jewish community, a privilege that gave him the podium, which he used to speak about the Jewish perspective on unity and peace.

At the close of the dinner, two Chabad-Lubavitch rabbinical students, Chaim Immanuel and Chananya Steinmentz, were invited with two members of the Jewish community to the podium, for a traditional rendition of “Maoz Tzur” in honor of Chanukah.

Prime Minister Lee Hsien Loong presented checks to various charitable organizations, among them the National Kidney Foundation-Hougang-Punggol Dialysis Centre which received half a million dollars and $100,000 to the President's Challenge

“This was quite an intriguing event,” Rabbi Aberjel told Lubavitch.com. “But more interesting is the fact that here in Singapore, talk about peace and tolerance and mutual respect are not theoretical notions.

"Singapore’s government actually works hard to foster real peace and tolerance—and it should stand as an example to the rest of the world.”