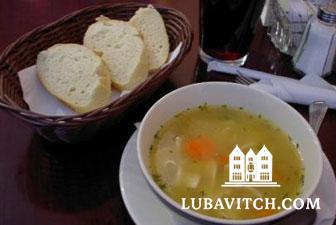 Potentially changing the course of prison life for Jewish inmates was the last thing the Chabad rabbi had in mind when he walked into the U.S. District Court one recent day.

Chabad of New Hampshire’s Rabbi Levi Krinsky showed up at U.S. District Court in Concord, New Hampshire, to offer moral support to Albert Kuperman, a teenager whose mistakes landed him in prison and whose spiritual awakening there breathed life into the term for jail that’s fallen out of fashion: penitentiary.

Kuperman was in court because prison officials revoked his kosher diet privileges as punishment for allegedly purchasing non-kosher food at the canteen and eating chicken prepared for the rest of the prisoners. The six-month suspension of kosher food service was in place to deter the non-sincere from gaining access to special diets, which cost slightly more than the average “chow line” fare.  Kuperman maintained he had been “strong armed” into purchasing the canteen food, and that he did not eat it.

Judge James R. Muirhead mused whether the punishment fit the crime. He spotted Rabbi Krinsky sitting in the courtroom, and called on him to testify. The judge asked Rabbi Krinsky about the orthodox Jewish reaction to kosher backsliders. Rabbi Krinsky, who’s advocated for New Hampshire’s handful of Jewish inmates in the past, hit upon a satisfying parable:

“If a diabetic was caught eating sweets, would it be appropriate for him to be punished by forcing him to eat a high sugar diet for six months?” he asked the court.

The judge saw the logic and quoted Rabbi Krinsky’s point in the decision. He recommended that officials find ways to punish infractions of prison rules “without disallowing their religious practice.” Judge Muirhead was clear that his decision only applied to sincerely observant Jews. Still Rabbi Krinsky feels that the ruling will have an important impact because punishing inmates with deprivation of kosher food for violating their diets is a widespread prison practice.

Even though there are only an estimated 6,000 Jewish inmates in U.S. prisons, with only 2,000 of them requesting kosher, providing kosher food in prison has been a thorny issue for many years and the subject of many court cases. America’s largest Jewish prisoner advocacy group, Chabad-Lubavitch's Aleph Institute in Bal Harbour, Florida, has been actively working on the issue since its founding in the 1980s.

Problems run the gamut from small town wardens who have never heard of kosher to kosher foods prepared in the jail’s non-kosher kitchens and prisons that expect non-pork vegetarian diets to suffice as kosher. Strides have been made, however. A standardized kosher menu was recently created for inmates in Federal prisons. In Texas, as a result of Chabad of Houston’s extensive efforts and litigation – with advice from Aleph – the state prisons have a kosher diet available. Last year, kosher diets became available in California state prisons.

Following the hearing, Kuperman’s kosher diet – three pre-packaged meals a day – was restored, pending approval by a U.S. District Court Judge. Kuperman called the rabbi, collect, a few days later with news that he has been receiving his kosher food without restrictions and was “very happy with the result,” Rabbi Krinsky said.

“It feels good to help one Jew and know that your actions have the potential to help many more.”