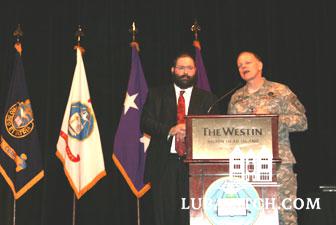 (lubavitch.com/lns) In a speech hailed by one priest as the most inspiring talk since Martin Luther King Jr., Chabad Rabbi Yossi Jacobson addressed the Chief of Chaplains Senior Leader’s Training Conference on March 6, 2008.

As the featured religious speaker at the event in Hilton Head, South Carolina, Rabbi Jacobson was the first rabbi to ever address the United States Military’s annual chaplaincy event.

His invitation came at a very difficult time for the U.S. Military Chaplains. Two-star Major General Chief of Chaplains Douglas Carver later reflected, “We are broken, but Rabbi Jacobson helped us find light within our brokenness.”

During the five-day conference, General Carver and other advisors tried to instill faith within the beleaguered chaplains’ hearts. These spiritual advisors “have grown tired and stressed in the midst of providing ministry and support to those who are fighting the war,” said General Carver of the five-year battle in Iraq and the general war against terrorism. The goal of the conference is to provide them with the religious strength to continue their personal battle.

Chaplain Colonel Yakov Goldstein, also a Chabad rabbi, who has been in the military for more than three decades and is currently the most senior ranking Jewish chaplain, was approached by conference organizers a year ago. Coordinators wanted his help to create a “different kind of event,” in what would be General Carver’s first year as chief of chaplains. They specifically wanted a Jewish speaker to “change the Christian paradigm of speakers.”

Rabbi Jacobson was Goldstein’s first choice, and after listening to his taped speeches and investigating his background, the “Chief went along with my [Goldstein’s] recommendation."

A hushed crowd of 1,000 chaplains and chaplain assistants, from active duty, army reserves, and the National Guard, were present for the address. In attendance, there were only three Jewish and one Muslim clergymen. Flanked by the six flags, Rabbi Jacobson addressed the theme of “Spiritual Leadership in Persistent Conflict.”

During his hour on the podium, he discussed ways to find G-dliness in a broken world and how to transform that latent spirituality into daily relevance. Although he referenced Biblical sources, Chasidic thought, and the Lubavitcher Rebbe’s teachings from the 1960s and 1970s, the chaplains were amazed at the words’ contemporary relevance.

Of their own volition, each chaplain pulled out his Bible to follow the Rabbi’s Biblical references. In one instance, he analyzed the importance of Joseph, the son of Jacob as one of the original chaplains who encouraged his fellow prisoners as well as the Egyptian population when he was appointed viceroy.

One senior chaplain, who heads a large church, told Colonel Goldstein that Rabbi Jacobson’s insights have given him ideas enough “for months of sermons.”

At the end of his talk, Rabbi Jacobson was met with a thunderous standing ovation. Several chaplains told Carver that had he scheduled the speech for an hour more, “no one would have left.”

Motivating his audiences is not a novel task for this veteran speaker. Rabbi Jacobson lectures in his native Brooklyn and has addressed Jewish and non-Jewish audiences in 40 countries and six continents. But for him this speech was different.

“These are people who follow our men and women in the military into very difficult situations around the world,” Rabbi Jacobson explained. “It was awesome and humbling to address them and to be a conduit for G-d’s message.”

Chaplain Carver expressed his admiration for Rabbi Jacobson’s words. “It was fabulous how he related to each of the chaplains.”