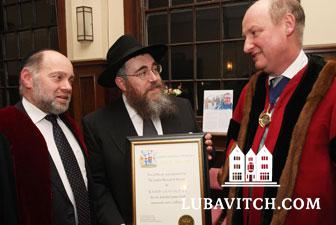 On Thursday, February 21, Chabad's Rabbi Leivi Sudak received a public award in recognition of his “outstanding citizenship.” Barnett borough councilor Brian Gordon, a lawyer and personal friend of the Rabbi, nominated him for the honor.

“I have known Rabbi Sudak since he came here in 1986,” councilor Gordon told Lubavitch.com, “and he has made a wonderful impression on the community and has helped a lot of people.”

Mayor Maureen Brown presided over the ceremony in the council chambers. Hundreds were nominated for the distinction and 45 runners-up were chosen. Of those, Rabbi Sudak was one of seven to receive this prize. The vellum certificate recognizes the Rabbi for his “pastoral and community work, particularly with disaffected youth and pioneering work on the streets of London.”

The Mayor expressed her pleasure in presenting the award to Rabbi Sudak. “He received the award…for his general contribution over and above the call of duty, not just to the Jewish community but to the community at large, especially his work with young people . . .”

When the Sudaks moved to Edgware 22 years ago, the broader public was struggling with its youth. Many teenagers, disaffected with life, wasted their days and spent their nights on the streets. The sentiment that “life has nothing to offer” was rampant. Saturday nights saw thousands hanging out on street corners, engaging in illicit behaviors. While the community cringed at this “disgrace,” Rabbi Sudak found his calling.

“I was driven by the teachings of the Baal Shem Tov,” he elaborates, “who explained that what a person sees and hears is a message of divine service.”

With the assistance of professionals and psychologists, Rabbi Sudak took to the streets, helping tens of thousands of teenagers. Together with his crew, he visited the often “uncomfortable” neighborhoods of Leicester Square, Soho, and Piccadilly Circus. To his credit, many of the teenagers he reached turned away from drugs and delinquency, and were motivated to complete their schooling, and join the work force.

Religion or background “is irrelevant,” says Rabbi Sudak, “when there is a child before you who is in trouble. Today, one of the senior managers at the local 999 Emergency Call Center is a once-troubled black youth who, with Rabbi Sudak’s help, turned his life around to find happiness and success. “We pioneered attitudes,” says the Rabbi, “that are now being used globally to deal with youth.”

Councilor Gordon adds that the Rabbi’s work has reached a broader audience than these grateful adolescents.

“I feel, together with many others, that he deserves to be recognized for his charitable and outreach work within the community.”

That work includes an award-winning preschool and a successful hospital and homebound visitation program. Rabbi Sudak plans to expand his thriving programming, through the addition of new Chabad Houses and more representatives in his region.