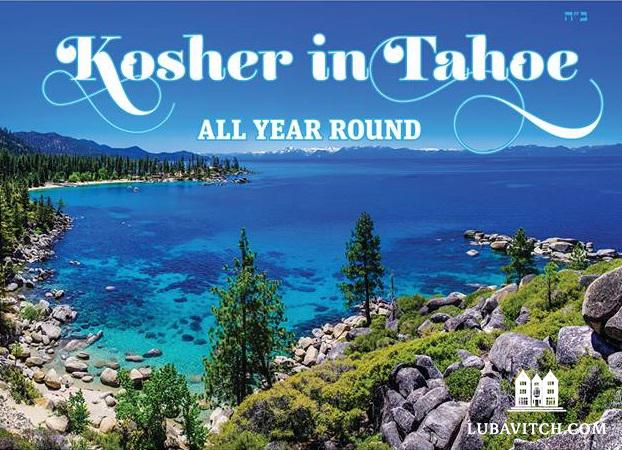 When Khymberleigh Herwill-Levin moved to picturesque Lake Tahoe on the California-Nevada border some six years ago, she found a lot to enjoy.

But when it came to giving her youngest daughter, Jaymee-Leigh, a Jewish education, Herwill-Levin ran into some difficulties. The South African mother of five has long been a supporter of Chabad, and attended their programs in the various cities she and her family have lived in. She even transformed a preschool she ran in Johannesburg years ago into a Jewish and kosher early childhood program at the behest of the local Chabad rabbi.

So when looking for a Jewish program for her daughter, she thought about Chabad. Unfortunately, the nearest Chabad was in Reno, Nevada, more than an hour away; not exactly an ideal commute under most circumstances, but especially challenging given the region’s climate and twisty mountain roads.

Still, Herwill-Levin enrolled her daughter there. “I used to leave at 7:30 in the morning to get her to school on time, then drive back for work and then go back for pickup. I did it for one year, but it was too hard.”

With the opening in August of the Chabad Jewish Center in Lake Tahoe,  that’s changed. Now when Herwill-Lewin wants to go to a Chabad program or to bring her daughter there all she has to do is go “down the road.”

Among the programs launched by Lake Tahoe’s new Chabad representatives, Rabbi Mordey and Shaina Richler, are a weekly Torah class, a Women’s Circle group, a kids club and special programming for teens.

“I knew it would be successful,” Herwill-Levin said. “I’ve been here and I’ve met people and I knew there was a need. They’ve only been here for four months and they are doing extremely well.”

Real estate agent Susan Abrams, who has called Lake Tahoe home for more than 30 years, has been looking for a way to deepen her connection to Judaism. She first met the Richlers when they came to her office in search of a home. “I thought wow, this is exciting.”

Abrams recalled that during that first meeting the Richlers asked her if there was a need for Chabad in her community. “I said, there’s a huge need, and there’s nothing I would be happier to do then to help bring you here. I think it’s a very positive thing and I’m thrilled.

Divided into North Lake Tahoe and South Lake Tahoe, the Lake Tahoe region is, according to local estimates, home to some 1,000 Jewish households. That figure that doesn’t take in to account those who come from across the state of California to vacation there. There are also two Jewish congregations in the region; neither is Orthodox and both were founded some 30 years ago.

One of the area’s early Jews was the prominent Jewish California financier Isaias W. Hellman. At the local Sugar Pine Point State Park you can tour the Hellman-Ehrman mansion that he built as a summer home at the turn of the 20th century. Hellman was also known for helping to create the University of Southern California.

In the short time they’ve been there, the Richlers have drawn a diversity of people from a wide area. Many come from nearby towns in Nevada such as Carson City and Minden to participate at Chabad’s programs.

Making the initial connections in the community required a bit of legwork, but their efforts were soon rewarded. “People are friendly and open to meeting a rabbi, something they might not do in other places,” said Rabbi Richler, who grew up in Southern California.

“We asked one Jew if they knew another, and then someone sent us to another person. It was just word of mouth. Once we actually made the move, people started contacting us. At Chanukah we had a menorah up in front of our house and people just stopped by.”

Local Jews, said Shaina Richler, originally from Sydney, Australia, are looking to forge a spiritual bond with Judaism. “They are looking for meaning in their life and a deeper connection to G-d.”

Susan Abrams, the realtor who helped Chabad in their search for a place, participates in the Jewish educational and social opportunities Chabad has brought to town. “I participate in Friday night services, a Torah study class and a great women’s group that has been getting together once a month.”

“Never did I believe that I would be able to get closer to my faith and my beliefs. I am so grateful.”