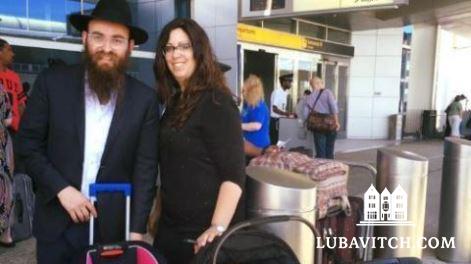 Known also as the Hummingbird Capital of the US, Sierra Vista (pop, 45,000) in Cochise County, Arizona, draws birdwatchers from around the world.

Its Jewish population is tiny–500 with several hundred more dispersed in the county. But that’s enough to have convinced Rabbi Bentzion and Chaya Shemtov to move down there with their two children, and open a Chabad House. The young couple will provide services to Jews in surrounding areas such as Brisbee and Green Valley and to the fluctuating Jewish population at Fort Huachuca, a nearby U.S. army base where Rabbi Shemtov is a recognized volunteer.

Chabad of Sierra Vista is the twenty-first branch of Chabad Lubavitch to open in the state of Arizona, and the first in Cochise County. With little Jewish programming in Cochise County until now, the county’s Jews were driving eighty miles to Tucson for all their religious needs.

The Shemtovs, who’ve made several visits and hosted various programs in the city before deciding to settle here, say they found strong interest on the part of the area’s Jews. Among the programs they’ve launched: hospital and senior visitation, hospital and military chaplaincy, mezzuzah loans, kitchen koshering, and afterschool programs.

Bentzion grew up in Tucson where his parents, Rabbi Yossie and Chanie Shemtov, serve as Chabad emissaries.

He and his wife can be reached at JewishSierraVista@gmail.com.