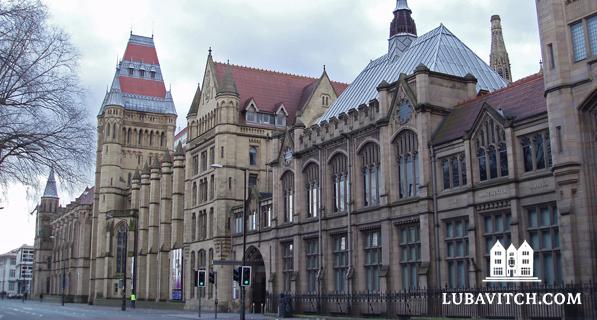 (lubavitch.com) Manchester’s 1500 Jewish university students now have Chabad representatives to call their own.

Though their first big Chabad event is still in the planning stages, the couple is already well versed in the art of running a Chabad center. Mushky Loewenthal’s parents direct the Chabad Center of Sharon, MA. Rabbi Loewenthal, raised in London, was inspired by the work of his siblings, three of whom are scattered across campuses.

“You can make a phenomenal difference on campus. We are very excited to be at a university campus. Students are the future of British Jewry,” said Rabbi Loewenthal.

“I have been profoundly impressed by the Loewenthals. They are an exceptionally sincere couple indeed,” said Rabbi Rubinstein. “I expect we will work nicely, in harmony, on campus.” He has invited Rabbi Loewenthal to give a Shabbat lecture at the campus synagogue.

The university has a long history of welcoming Jews to campus. Established in the early 19th century, University of Manchester was originally known as Owen’s College. In a departure from the style of the times, Owen’s College’s charter declared students “should not be requested to make any declaration as to, or subject to, any test whatsoever of their religious opinions.”

With freedom from religious discrimination built into its foundation, University of Manchester attracted many Jewish students and professors. Scientist Chaim Weizmann was perhaps its most famous Jewish staff member. Weizmann rented a lab at the university and was employed in 1905 as a chemistry demonstrator and lecturer.

Manchester itself is home to England’s second largest Jewish community.   Chabad centers have been serving the wider Mancunian community for years, and there are vibrant yeshivas in North Manchester. Many Jewish students commute from orthodox communities there to the University of Manchester in the south part of the city, but the majority of the Jewish students are less affiliated. The Loewenthals, whose work is supported by philanthropists David Slager and Zalman Klyne, have made those students their priority.

“We want every single Jewish student to be comfortable and to have a place at a Shabbat table,” said Rabbi Loewenthal.

Mobilizing unaffiliated Jewish students to openly identify themselves as Jews might be a hard sell. University of Manchester is home to vociferous anti-Israel activists. In 2007, students at the university chose al-Najah University in Israel’s West Bank as their twin. Al-Najah is the alma mater of nineteen Palestinian suicide bombers. Earlier this year, Jewish student mobilized to block a “peace through education” statement that labeled Israel as an apartheid state.

“Jewish students tend not to identify with Jewish organizations, because that would put them on the front line of intimidation,” said Rabbi Rubinstein. “I think Zalman will do an excellent job to show students there’s nothing to be prouder of than their Jewish identity.”