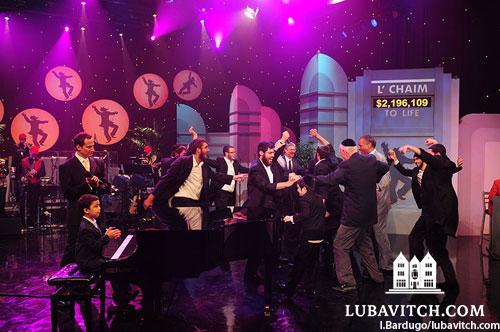 (lubavitch.com) With heartfelt appeals and joyful performances from a diverse group of celebrity guests, the 2008 Chabad "To Life" Telethon generated more than $8 million for the charity.

"We are so deeply humbled and inspired by the amazing generosity shown by our community," said Rabbi Boruch S. Cunin, Director of West Coast Chabad.  "Especially in these tough economic times, more and more people are turning to Chabad for help — and thanks to the incredible kindness of our wonderful partners, we can continue our vital mission to serve those in need."

The program featured a cross-section of Los Angeles' political leaders — including Sheriff Lee Baca, Supervisor Zev Yaroslavsky, and many members of the L.A. City Council — who all came onstage to lend their support for Chabad's efforts.  There was also a moment of silence in memory of all those affected by Hurricane Ike in Texas and the tragic train collision in California.

In a special part of the program hosted by Los Angeles sports broadcaster Vic "The Brick" Jacobs, L.A. Lakers point guard Jordan Farmar shot baskets live on-stage in a race against the clock to generate donations.

In addition to Ethan Bortnick, the Telethon's musical lineup featured Keith David performing a special version of "Fiddler on the Roof" to open the show, along with stirring performances from Mike Burstyn, Mordechai Ben David, Avraham Fried, 8th Day, The James Chew Boys Choir of Harlem, M-Generation, and other acts.  And of course, the famous dancing rabbis were also on-hand throughout the special event.

Chabad's Lamplighter Humanitarian Award was presented to Shimon Waronker, a rabbi who serves as the Principal of Junior High 22 in the Bronx — and who turned that once-violent, failing school into one of the safest, highest achieving public schools in New York.

Small business guru Michael Gerber — the best-selling author of the "E-Myth" books — also spoke onstage, praising Chabad's grassroots efforts and discussing his role consulting with the organization to make it even more effective in serving the needy.

The final on-air tote of the night stood showed that almost $8.1 million had been donated by the public, and additional online gifts continued to arrive after the broadcast on both www.Chabad.com and www.ToLife.com."Tonight's joyful event celebrated the vision of the Lubavitcher Rebbe, Rabbi Menachem M. Schneerson, by showing the unstoppable power of goodness and kindness," said Rabbi Cunin after the program.

"All of us at Chabad will draw renewed strength from the incredible charity of our supporters, and we will now redouble our efforts to make this world a better place for each of G-d's children."