Chabad of Wall Street Moves On, Does Not Forget 9/11 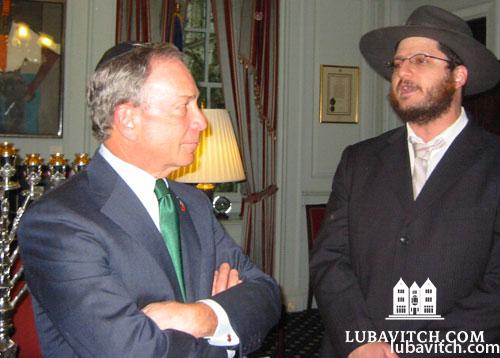 (lubavitch.com) “When Ground Zero is four blocks away from home, you don’t wait until 9/11 to remember 9/11. It’s in a corner of your heart always.”

So says Rachel Katz who directs Chabad of Wall Street with her husband Rabbi Shmaya Katz.

When the bells toll on Thursday, Chabad of Wall Street will be carrying on its activities – teaching Torah classes, wrapping tefillin around the arms of those who hold Wall Street in their hands, preparing food for communal Shabbat meals.

Seven years after that black day, Rabbi Shmaya and Rachel Katz, directors of Chabad of Wall Street, have moved on in a big way, but not forgotten, aiming to help their corner of Manhattan find strength in Jewish teachings. They have brought in a new couple, Rabbi Chaim and Faige Drizin, to assist them in their work, and are in the discussion stages of a preschool. Later this month, they will be moving their home to an apartment in Tribeca to join the booming neighborhood that is estimated to be 20-30% Jewish.

The Katzes had been working with Jewish businesspeople and residents of Tribeca, Wall Street and Battery Park City for two and a half years before 9/11. On the day America’s reality changed, the couple’s twin boys Avrohom and Moshe Yitzchok were 2 years old, and Mrs. Katz was in the morning sickness phase of a new pregnancy.

Noting that his wife looked especially tired and wan, Rabbi Katz postponed his 7:45 appointment to put tefillin on with a Merrill Lynch executive in the World Financial Center, directly across the street from the World Trade Center.

Mrs. Katz was sitting by the window of the couple’s apartment on Rector Street, right off the Hudson River, when she saw an airplane rocket by too low, too fast, toward its deadly target.

“We saw people frantic, running. We grabbed the children and a few Pampers and ran for our car,” said Mrs. Katz

Plans to take refuge in Brooklyn got the Katzes outside as the second plane struck.  The air around them turned black, chunks of concrete and metal hailed down from the sky. They clutched their children to their bodies to shield them from filing cabinet sized missiles of concrete, shards of glass, throat burning chemicals and soot.

“I knew that this was it, and we were going to die. I said goodbye to my children. I held their hands. Covered their eyes. I cried Shema Yisrael and asked God to forgive me."

It was then, Rachel told lubavitch.com,  that she "found out what death was, and it is not a good place to be."

“To be alive after that is a huge miracle.”
Scrambling and stumbling over the mountains of debris, the Katzes felt their way to an apartment lobby, an airless, dark refuge. Strangers brought them up eleven flights of stairs, gave the children clothing, dabbed at Rabbi Katz’s bloodied back. With thousands of others, they boarded a tugboat that took them to Jersey City. Conventioneers at a hotel offered the Katz family their suite, and bought whatever kosher food they could find – gefilte fish, matzo crackers, baby food for the toddlers.

It took three days for the ashes and rubble to rinse completely from the twins’ soft hair. The sound of airplanes sent Rachel Katz grabbing her children and running for cover for weeks afterward.

“People who never would come to shul came. Every chair was filled. People sat on the floor,” said Mrs. Katz.

Alexander Goldin, a partner in a New York law firm, remembers that day. “Rabbi Katz maintained a positive focus. He’s the type of person that when you are down and you talk to him, he is truly able to raise a person’s spirit.”
But the post-9/11 world was a struggle for Chabad.

“We were given the opportunity to start over,” said Rabbi Katz.

In other words, Chabad of Wall Street lost everything.

Community members moved away. Businesses that employed the executives that studied Torah with Rabbi Katz were shuttered or relocated. Those that remained were broken – in spirit, emotionally, financially. A real estate mogul acquaintance committed suicide by jumping off of his apartment’s rooftop. Even the Katzes’ household goods were gone, rendered completely unusable by the poisonous fumes, the asbestos dust.
Today, Chabad of Wall Street is poised to be “better than ever before,” said Rabbi Katz.

In a neighborhood of transient business people, Chabad's services have attracted a loyal following. Stella Jacobson, her husband and children attend Friday night Shabbat services and then dinner ala Mrs. Katz.

“Everyone gets a chance to sit and talk. It is very warm and welcoming,” said Mrs. Jacobson, an admissions director at a school on the Upper East Side. She met Mrs. Katz at a dinner party.

“She can talk to anyone about anything. She just knew how I was feeling.” A year and a half later, Mrs. Katz introduced Mrs. Jacobson to her husband. “I knew nothing. Now I keep a kosher home. I keep Shabbat. That’s Rachel.”

Rabbi Katz maintains a dawn to midnight schedule of classes and tefillin regulars in some of New York City’s most high-powered corner offices. His Chanukah menorah lighting venues have become something of a legend.

In Tribeca, film industry movers and shakers: agents, entertainment lawyers, directors and writers are in Rabbi Drizin’s private classes unfolding the mystical side of Judaism that’s way beyond wearing a snippet of red embroidery floss as a bracelet.

He also reaches a core group of 100-plus financial wizards, bringing them the inner meaning of the weekly Torah portion in 30-minute chunks.

“They don’t sleep. They are constantly on the move. When they take time out to learn Torah, they want to get right down to the essence. It’s one of their few islands of calm,” Rabbi Drizin said.

Finding a piece of Manhattan Island to call their own, to house the synagogue and preschool to be named for George Rohr’s mother, the late Mrs. Charlotte Rohr, is Chabad of Wall Street’s next big step, and, say the Katzes, a small way to show their gratitude to Mr. Rohr.

“Because of him,” Mrs. Katz says emphatically, “our community has grown as beautifully as it has.”

After the High Holidays, say the Katzes, Chabad of Wall Street will be launching various drives to raise funds for their dream building. It will take millions of dollars for a down payment in this neighborhood.

“It will take a miracle," says Mrs. Katz.

Then again, Chabad of Wall Street is no stranger to miracles.