Chabad of The Upper West Side Wins Approval On Landmark Project 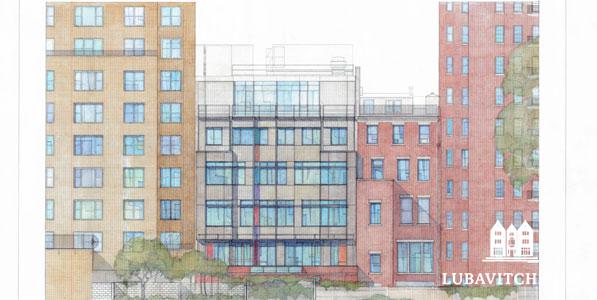 Rear of the building.

(lubavitch.com) A unanimous decision reached Tuesday by the New York City Landmarks Preservation Commission, granted Chabad of the West Side a Certificate of Appropriateness allowing for construction on two neighboring buildings on West 86th Street between Columbus and Central Park West.

Built in the late 1800s, the townhouses will now serve a communal purpose. Total cost for acquisition, construction and furnishing, says Rabbi Shlomo Kugel, director of Chabad of the West Side in NYC, is approximately $30 million. The project is expected to be completed by 2013.

The New York City Landmarks Preservation Commission must approve construction in designated historic areas of the city. According to its website, commissioners “consider the building’s architectural, historical, and cultural significance and its architectural style.”

Rabbi Kugel has worked in conjunction with the noted architectural firm, Platt, Byard, Dovell, White, to ensure these specifications are met. Of their plans, the commission only required minor modifications—changes, Kugel says, that do not affect the scope of the project.

In keeping with the neighborhood’s character, notes Associate Director Rabbi Meir Ossey, “the renovations will preserve the buildings’ historic appearance and will also restore original architectural details that have been lost over the decades.”

Construction can hardly begin soon enough for this community center. Until recently, Chabad conducted its activities in two separate properties, both rentals, five blocks apart. The organization’s extensive programming, including a popular preschool with a waiting list, afternoon activities for kids, and adult education, is bursting at the seams. Classrooms are dismantled weekly to make room for Shabbat services, but even that is not enough.

The project, which will finally give Chabad of the UWS adequate space, says Rabbi Kugel, is the result of the vision and generosity of David and Lara Slager, together with many other West Side families.

The two adjacent townhouses will be superbly designed to maximize a stunning, 30,000 square feet of space. The buildings will include an additional floor below ground and the addition of a partial penthouse. Thirteen sunny classrooms will accommodate as many as 165 students; meeting spaces and a social hall will accommodate the center’s classes and events; and a men’s mikvah is planned for the basement. A large sanctuary is, of course, a highlight of the new building.

Rabbi Ossey says that finding such a site is a rare blessing in a “city that is generally vertical.” To facilitate a wide range of programming, states Ossey, “we were very fortunate to find side-by-side properties which will provide us with adequate horizontal space.”

Crediting the community’s support in obtaining this crucial approval, Rabbi Kugel acknowledges letters by members of the community to local elected officials, and their vocal endorsement at public hearings.

Occupation is yet several years away, but Chabad of the West Side is celebrating this weekend. At an inaugural Kiddush Shabbat morning, the community will express their gratitude for another move, another step in the process: Come November 1, Chabad of the West Side will move its activities from West 92nd Street to another, improved leased space adjacent to its West  97th Street space.

“This makes it possible for us to operate from one facility until our move to the new West 86th Street Chabad Center,” explains Rabbi Ossey.

The temporary site’s 11,000 square feet allowed the Chabad Early Learning Center to absorb many of the children on the waiting list this year (180 children are currently enrolled).

“Until now, though we’ve made of the best of rental space, our growth was restricted,” Rabbi Ossey says. “With the new center, we will have the freedom to take great strides in truly enriching the quality of life for the local Jewish community.”