Chabad of Koh Samui Reaches Out after Crash 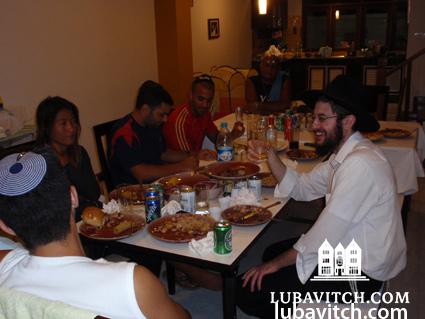 (lubavitch.com) Rabbi Mendy Goldshmid brought hot kosher food and warm compassion to the 24 Jewish survivors of a Bangkok Airways flight that crashed Tuesday in Koh Samui. The plane, which crash-landed in a driving rain and slammed into an empty building, was carrying 72 people. The pilot was killed and seven passengers were injured. The Israelis were sitting in the rear of the plane which incurred little damage.

At a hotel several hours later, Goldshmid led a moving prayer service, where the survivors thanked G-d for their miraculous recovery. “When they saw the rabbi bring kosher food and comfort, they started to calm down a little,” says Sara Hinda Goldshmid of her husband’s ministrations.

The couple has been living on this island, dotted with coconut trees and expansive beaches, for eight months. Koh Samui is off the southeast coast of Thailand; the Chabad center here is Thailand’s sixth. Approximately 100,000 Jewish tourists (75 percent of whom are Israeli) visit annually. A small community of 40 individuals lives on the island permanently.

Chabad offers a kosher restaurant, a computer café, classes and a regular prayer service, as well holiday programming. Many Israelis dine at their Shabbat table each week and each holiday is celebrated with locals and tourists.

On Thursday, the community will gather to open the first women’s mikvah on Koh Samui. The party will also include a large wedding ceremony for two tourists visiting from Bangkok. Rabbi Yosef Kantor, who directs Chabad of Thailand, helped build the mikvah and will be present to inaugurate it. Goldshmid is eager to introduce visiting and local women to the beauty of the mikvah; interest, she says, is already high.