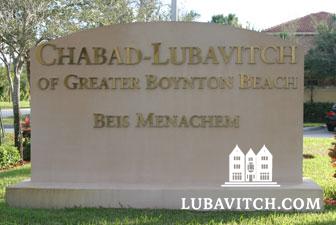 On the grounds of Chabad of Boynton Beach. (photo: Susan Friend for Lubavitch.com)

A demographic survey commissioned by the Jewish Federation recently established Boynton Beach as the fastest growing Jewish community in the country, and the most densely populated Jewish area outside of Israel. In 1987, there were 9,300 Jews in Boynton Beach. The survey taken in 2005 reported a whopping 58,000, and most recently demographer Dr. Ira Sheskin estimated the Jewish population in the Greater Boynton area at 86,000.

(Lubavitch.com/LNS) If the 400 guests at Sunday evening’s dinner celebrating the Bar Mitzvah year of Chabad of Boynton Beach were any indication, this community seems to be growing younger as it grows in number.
Many credit the dynamic activities of Chabad’s Rabbi Sholom and Dini Ciment with contributing to a marked change in the demographic profile of this area once considered a retirement community in the suburbs of southern Florida.
Thirteen years ago, the Jewish population was scattered, numbering only 15,000. There was barely a Jewish infrastructure, says Rabbi Ciment, recalling that during the family’s first week here he  was “advised to go home.” There seemed to be no interest in his vision.
But Ciment followed his convictions, and took his cue from the Rebbe’s blessings.
Today, the community he built quite literally from the ground up, has outgrown  its $4 million, 15,000 square foot facility, prompting Chabad of Boynton Beach to acquire the adjacent 2.5 acres of property on El Clair Ranch Road.
At Sunday night’s dinner, Rabbi Ciment announced the launching of a $10 million expansion on the adjacent property.
The purchase came on the heels of the sellout of two estate home communities, Wyndsong Estates and Wyndsong Isles, both created with the idea of having luxurious family homes, with "kosher" kitchens, five to six bedrooms, all within walking distance of the Chabad campus. A Total of 101 homes were sold as Chabad teamed up with Paramount Residential to make the dream of many young families a reality.

In 1996, two years after the Ciments arrived, they moved Chabad’s services from their two-bedroom apartment into a store-front shul.

Shmuley Finn, one of the founding members of the congregation still affectionately refers to it as the "Shul by the dumpster."

With the purchase of three acres of land in 1999, Chabad moved the congregation of 50 families into the shack that stood on the property. The small volunteer corps of dedicated members turned the shack into a shtible. Two years later Ciment was ready to build the real thing.

Just as the Ciments were getting serious about their plans, Alan and Marlene Zavodnick moved to Boynton Beach. During introductions on Alan’s first Shabbat in the shul, Rabbi Ciment quickly gathered that Alan’s company, Alko GC of New Jersey, was going to build the Shul.

The shtible had to make way for something much bigger, so Alan's first directive was to raze it to the ground. Beginning in 2001 services took place in two modular trailers that were parked on the far end of the property.

The congregants reminisce about trekking through the mud on a rainy Shabbos morning to hear the young Rabbi Ciment. Two years later the Shul's ark would rest on the pinpoint location of the shtible.

Today, Chabad Lubavitch of Greater Boynton Beach enjoys a membership of 500 families and is nestled on three acres surrounded by tens of thousands of homes. The campus houses an opulent sanctuary, preschool, hebrew school, luxurious mikvah, and a comprehensive range of adult education classes free to anyone. It has become one of the most prestigious synagogues and Jewish centers in Palm Beach County.

"The beauty of our community is the kaleidoscope of all types of Jews. On a Shabbos morning our sanctuary is bursting at its seams as it welcomes the retired, the children, the baby boomers, men, women, and children of all ages and backgrounds."

But Rabbi Ciment isn’t sitting back just yet. Along with the expansion project, he announced plans to open three new satellite Chabad centers to the North, West, and East of its hub in Greater Boynton Beach.