Chabad of Galloway Bridges the Generations 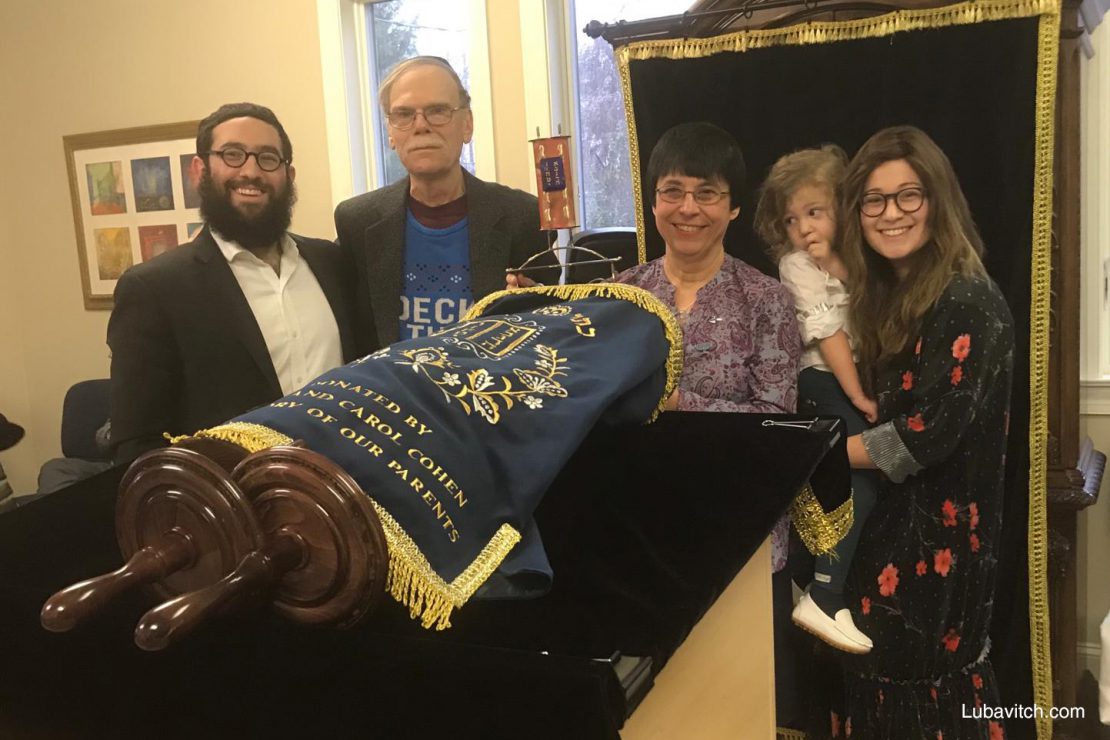 All News
By Shterna Karp

In October of 2016, Rabbi Meir and Shaina (Matusof) Rapoport arrived in Galloway township, New Jersey, to serve Jewish students at Stockton University. They purchased a property on the main street in town, a central location for students. “Chabad House–Jewish Student Center” read the sign they hung on the door of their new home on Jimmie Leeds Road.

An hour after they hung the sign, a woman called asking whether the Chabad center was just for students or if she could participate as well. Her call was the first of many. “The interest was clear,” shares Shaina. “We started catering to a whole new and unexpected demographic.”

Among this demographic were Mark and Carol Cohen who had moved to a retirement community in Galloway. On Simchat Torah, as synagogue members danced arm-in-arm holding a borrowed scroll, on loan from a larger congregation, Mark took note: the new center still did not have a Torah of its own. “Mark turned to me during the celebration and told me that he wanted to donate a Torah,” Carol remembers. “I reminded him that he also wanted to buy a car, and we couldn’t afford both.” The Cohens weighed the decision: a Torah’s value never diminishes. A car’s value declines the minute it leaves the dealership. “We chose the Torah. We knew a Torah scroll is an investment for life.”

The gift was entirely unexpected. And so the student center became a community center. Today, while weekday programs are geared toward the students, the area’s more senior Jewish residents join Shabbat prayer services, weekly Torah-portion classes, and kiddush lunches.

The Cohens commissioned two mantles for the Torah: a colored one for year-round use, dedicated in memory of their parents, and a white one for the High Holidays, dedicated to their toddler grandson, Harry. “We want him to know that Torah and Judaism is an important part of life, wherever it takes him,” says Carol.

The Jews of Galloway received their Torah on the last day of Chanukah. The Rapoports chose that day because of its timeless message: Chanukah is when we celebrate overcoming the forces that tried to stop the studying and observance of Torah, and years later, a small community in New Jersey is bringing a Torah home.

Rabbi Rapoport presented the Cohens with a glass sculpture of a Torah scroll and thanked them for being pillars of Galloway’s Jewish community. “We do it from our hearts,” says Mark. “Our Sages say that the only thing people take with them to heaven are the mitzvahs they did in their lifetime. We try to help the Chabad center in any way that we can.”