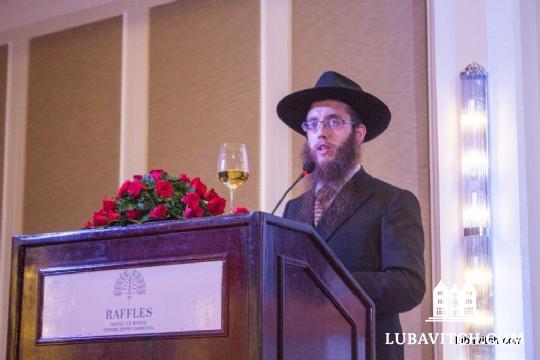 All News
Go to Photo Gallery
By Rena Greenberg , Cambodia

Chabad of Cambodia inaugurated their new Jewish Center in Phnom Penh on Tuesday, December 1st. Located in Daun Penh district’s Chaktomuk commune, the new facility will serve Cambodia’s small expatriate Jewish community, estimated at around 200 Jews, as well as the large number of Israeli backpackers and businesspeople who make their way through Southeast Asia every year.

Rabbi Bentzion and Mashie Butman opened Chabad of Phnom Penh in 2009. With their move to a large, eight story building, all the needs of the Jewish community will be better served at one convenient address: synagogue, social hall, industrial kitchen, restaurant, kosher shop, preschool, Mikvah, residential unit for the rabbi, offices and storage space.

Some 100 Jews from Phnom Penh and others from Siam Reap, Sihanoukville and Battambang attended the opening celebration. Nearly 50 guests arrived from abroad, including Chabad rabbis from Thailand, China, Hong Kong, Korea, Vietnam, Taiwan and Singapore.

The head Chabad emissary to Southeast Asia, Rabbi Yosef C. Kantor, from Bangkok, Thailand noted the significance of the building’s dedication on the 19th of Kislev, that date that marks the founding of the Chabad movement. “The only way to explain how a young couple can reach such a milestone in so few years after starting, is on the strength of the 210 years of the movement prior the their arrival.”

Rabbi Moshe Kotlarsky, who traveled in for the event from Chabad Headquarters in New York, affixed the mezuzah to the main door post and dedicated the honor to American philanthropist Mr. George Rohr, whose grant funded a substantial part of the project.

A representative of the Royal Palace, HMH Prince Norodom Sirivudh attended a reception following the opening. The prince apologized on behalf of the Royal Palace that HM the King was unable to accept the international delegation of Jewish leaders present in the room, as he was abroad.

In his greetings, he said: “I wish each and every one of you much success in what brings you to our country, and wish for Rabbi Butman and his wife to be a home for many Jews.”