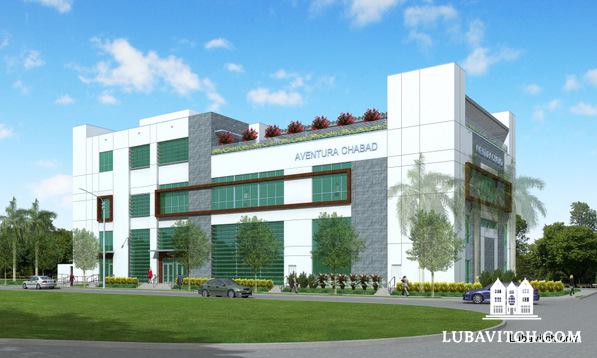 A digital depiction of the new Aventura Chabad Center

The four-story structure will be home to a host of modern facilities, including a commercial kitchen and ballroom that seats up to 600 guests, a library, daily chapel, administrative offices, conference and multipurpose rooms, classrooms, and a large rooftop garden. A separate building on an adjacent property will house a beautiful 5,000-square-foot preschool.

The new building will feature two sanctuaries serving the city’s respective Ashkenazic and Sephardic community. Chabad of Aventura is unique in that they’ve held dual minyanim for ten years, hiring a cantor for each shul. During the high holidays, each congregation sees at least 500 worshipers.

Community member and Gabbai Roberto “Robbie” Elovic is looking forward to the completion of the new center. “The impact of the building will be amazing,” he says. “We have two communities here, an Ashkenaz one and a Sephardic one, each with their distinctive backgrounds. The new center will be one-of-a-kind; we can merge two different communities together in the same building, allowing them to pray together while maintaining their unique traditions and customs.”

The center also shines a focus on mikveh: along with a state-of-the-art men’s mikveh and a mikveh for kashering dishes and other home utensils, the center will include a women’s mikveh with a luxurious bridal preparation room. The current mikveh is frequented by about 600 women a month, but the new mikveh is expected to draw more women.

The four-story structure will be replacing the current, 10,000 square-foot building, which Chabad moved into thirteen years ago but quickly outgrew. The old center will be demolished, and the space converted into a 6-story parking structure.

The center is quite the upgrade from Aventura Chabad’s first location: a trailer situated on the same grounds that are currently being renovated, grounds which were originally purchased twenty-five years ago. The Chabad was founded by Rabbi Casriel and Ziporah Brusowankin in 1970 to serve residents of North Dade. When the city of Aventura was established in 1995, it became one of the most densely populated Jewish areas in the world. Of the city’s 16,000 addresses, 84 percent are Jewish.

The shovel used by the Lubavitcher Rebbe at the groundbreaking of 770 Eastern Parkway 29 years go for the expansion and renovation Chabad’s central synagogue was used at the Aventura groundbreaking.

“This is going to redefine the spiritual landscape of Aventura,” says Rabbi Laivi Forta, who co-directs the Chabad with his wife, Chani. “People are very excited and have been talking about it for a long time. It is the center of the community.”

“It’s amazing that we have the opportunity to build this facility,” Elovic agrees. “Chabad first began in a trailer and now we’re building this incredible center.”

Construction is expected to be completed by spring of 2018.