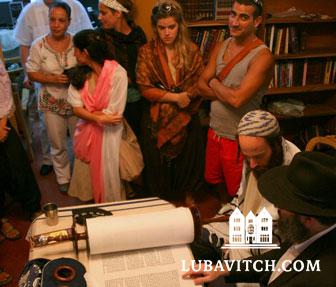 The scribe fills in the last letters as visitors look o. (photos: Meir Alfasi for Lubavitch.com)

With the Arabian sea lapping gently at its coastline, Goa, on India’s western coast is a traveler’s paradise. Hardly indigenous to its landscape of sun washed beaches and easy living were the images last week of a scribe filling in the last letters of a Torah scroll.

But the scenic beauty of this Pearl of the Orient is a magnet for 50,000 Jewish travelers a year, giving Chabad as many reasons to open a center in Goa, and create a Jewish infrastructure.

“In Israel, I identified as Israeli,” Guy Efraim recalls telling the Chabad representative to Thailand when he visited there years ago fresh from the IDF. “But in Bangkok, I thought of myself first as a Jew.” Chabad’s Rabbi Nechemia Wilhelm of Thailand helped Guy navigate as he explored his Jewish identity.

Today, Guy and his wife Mia are the Chabad representatives to Goa. Girded by his own personal experience—four years of travels through the Far East after completing his IDF service, experimenting with various forms of yoga and eastern meditations before meeting up with Chabad in Bangkok—Guy is connecting on many levels.

Guy and Mia were drawn to the idea of bringing Chabad to Goa several years ago, after visiting here. “We saw the enormous need and potential here,” says Guy, who is working intensely to create a comprehensive community center that would include a mikveh, the preschool, the Chabad House, and a kosher restaurant.

Despite many difficulties—heavy monsoons during the summer season with nearly 100 percent humidity, no a/c yet in the Efraim home, and the challenges of building a Jewish community from the ground up in a place so remote, both geographically and spiritually from Jewish mainstream life—the Efraims have quickly hit their stride.

A quiet Friday night means 100 guests round the Efraim's Shabbat table. Chabad’s kindergarten is filled with the babble of 35 little ones. And last Wednesday, scores of travelers, local Israelis and Jews from elsewhere came to participate in a Torah dedication—to be sure the first ever in Goa.

In the yard of the local Chabad House, decorated with local motifs and colorful lights, the Torah scroll was laid out on a table. Visitors looked on as the scribe dipped his quill in ink, and the last letters were filled in. Feelings of Jewish pride animated the dancing and singing around the completed Torah scroll.

At the festive party that followed, one woman shared her story with the others. Recently divorced after a nine-year marriage to a guru, she told of how she came to learn about herself, her own Jewish history and heritage, through meeting up with Chabad.

Then she thanked Chabad for bringing a new Torah to Goa. She seemed to be speaking for the others who nodded in agreement when she said, “I have never experienced anything as spiritually uplifting and moving as this.”