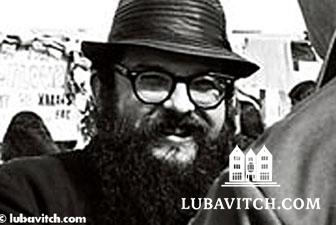 Rabbi Avraham Levitansky, of blessed memory, reaching out to others in the 1960s

Rabbi Avraham Levitansky, Chabad's longtime representative in S. Monica, passed away at his home this morning at the age of 67 following a lengthy illness.

Arriving in California in the mid-1960s, Rabbi Levitansky was the first emissary, or Shliach, appointed by the Lubavitcher Rebbe to serve with Rabbi Boruch Shlomo Cunin, director of Chabad on the West Coast.

Rabbi Levitansky also helped launch Chabad's Talmud Torah and educational institutions in California, and was active in opening of Chabad in Long Beach.

"Our thoughts and prayers are with his family as we mourn the tragic, untimely passing of our dear Rabbi Levitansky. He was a cherished friend and partner who worked tirelessly for the community — and was greatly loved in return," said Rabbi Cunin.

"Rabbi Levitansky was a man who, along with his devoted Rebbetzin, dedicated his entire life to the mission of the Rebbe. His contributions were beyond measure, and his legacy will endure." Funeral services are scheduled for Monday afternoon to allow family members from outside the country to attend.

Rabbi Levitansky will be buried in Chabad's Mount Olive Cemetery at 7231 East Slauson Avenue in the City of Commerce, where his mother and brother were also laid to rest.

The West Coast Chabad Kinus Hashluchos, or women's convention, that takes place Monday in Glendale will be dedicated to Rabbi Levitansky in honor of his lifelong work. Transportation will be provided for convention participants to attend the funeral services.

"The greatest tribute we can give to Rabbi Levitansky now is to follow his example," said Rabbi Cunin.