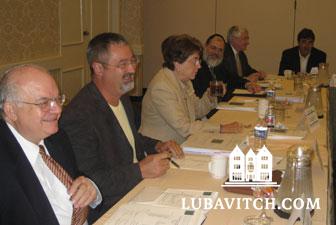 NCPSA is the umbrella association of private accrediting agencies in the U.S. It represents the major private and religious accrediting agencies in the US. Collectively NCPSA agencies accredit more than 30,000 schools. The process of accreditation grants a school the highest form of educational and administrative recognition and approval, which in turn translate into approval of the educational services it offers. It entitles a school to the support and trust of the community it serves Rabbi Kaplan chairs the only national Jewish accrediting agency, the National Accreditation Board of Merkos L'Inyonei Chinuch which is a member of NABMLC.

He has served on a number of committees since NABMLC became a member organization in NCPSA but his election to the vice presidency is a milestone. Kaplan is the only representative of a Jewish agency and a rabbi at that. It offers serious prestige to the Merkos agency he heads. According to the NCPSA bylaws the vice president serves for two years and then, barring anything unforeseen, is elected to the presidency. In a national NGO body where ministers of many faiths represent their various accrediting agencies, it is interesting to see a Chabad-Lubavitch rabbi presiding.