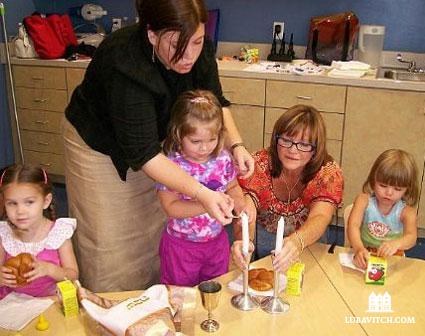 Opening a brand new preschool with an Italian twist, buying a new 3-acre plot for expansion, and planning for more satellite centers, Chabad of Greater Boynton is keeping up with and spurring Florida’s fastest growing Jewish population.

Between 1999 and 2005, Boynton Beach’s Jewish households boomed, soaring by  63 percent.  According to demographer Ira Sheskin of University of Miami, Boynton’s Jewish population growth exceeds even that of the popular, well developed Boca Raton. Still dominated by snowbird and early bird special diners, Boynton’s Jewish community is trending younger as it grows. Being close to Chabad, its new $1 million mikvah, Hebrew school, and adult education programs is part of the attraction.

On the first day of school, Gavin Haber, 2, twirls a ribbon together with his flock of toddler cohorts in the new Chabad Lubavitch of Greater Boynton Jewish Early Childhood Center. Their flurry of activity began when the little ones noticed the primary colored bird house dangling outside the classroom’s large windows. With the teacher’s inspiration, they imagined they were birds.

Letting kids’ interests take the lead figures prominently into the Reggio Emilia philosophy, an educational approach named for the Italian region where it originated. “The curriculum is driven by the children’s ideas, and we layer in all the skills with their interests. It develops a higher level of thinking because the children feel valued,” said JECC director Leslie Cooper.

Gavin’s parents, Eric and Danielle Haber, chose JECC because “we felt the program would be fantastic,” said Eric. “We clicked with Leslie, with the way the school was designed, its colors. It’s very warm and open.”

So far, eighteen children are enrolled in the school. JECC opened with a two year old and three year old class, with plans to expand to a pre-kindergarten class next year.

Situated on three acres, one of the most impressive features of the 10,000 sq. foot JECC building is its yard. Winding around the tricycle path stands a Lilliputian village set up for dramatic play with a garage, telephones, a faux-stone cottage and outdoor easels. Every stop is marked with a sign in Hebrew and English. In a few months, master gardeners from University of Florida will be planting gardens so the kids can farm and observe butterflies attracted by the flowers.

Also blooming is the number of young families involved with Chabad of Boynton. When Dr. Shoshana Wirtschafter gave birth to son Ethan in 2004, mostly retirees attended the Shalom Zachor, a welcoming party held on the first Friday night after a baby boy’s birth.

The Wirtschafters live in Wyndsong Estates, a 55-home development built near Chabad.

Kitchens built with double ovens, sinks and dishwashers, just right for keeping kosher, are a feature of the Wyndsong homes. Another development with similar features is planned.

With an eye to accommodating continued growth, Chabad of Boynton began its thirteenth year with a sizable land purchase. There are plans to build a rabbinical prep school on the property. "A bar mitzvah in Judaism, marks the ascension of a Jewish boy into adulthood," said Rabbi Sholom Ciment, who co-directs Chabad of Boynton with his wife Dina.

"We took that rather obvious cue and the Rebbe's blessings very literally. In honor of our Bar Mitzvah year we purchased the parcel of land adjacent to the campus.

"I would humbly say that at the price tag of $2.5mm and the immediate doubling of the current campus' size, Chabad is off to a good beginning into adulthood."