Chabad House In A Car

Chabad of Texas Towns Celebrates the Beginning of its Second Year 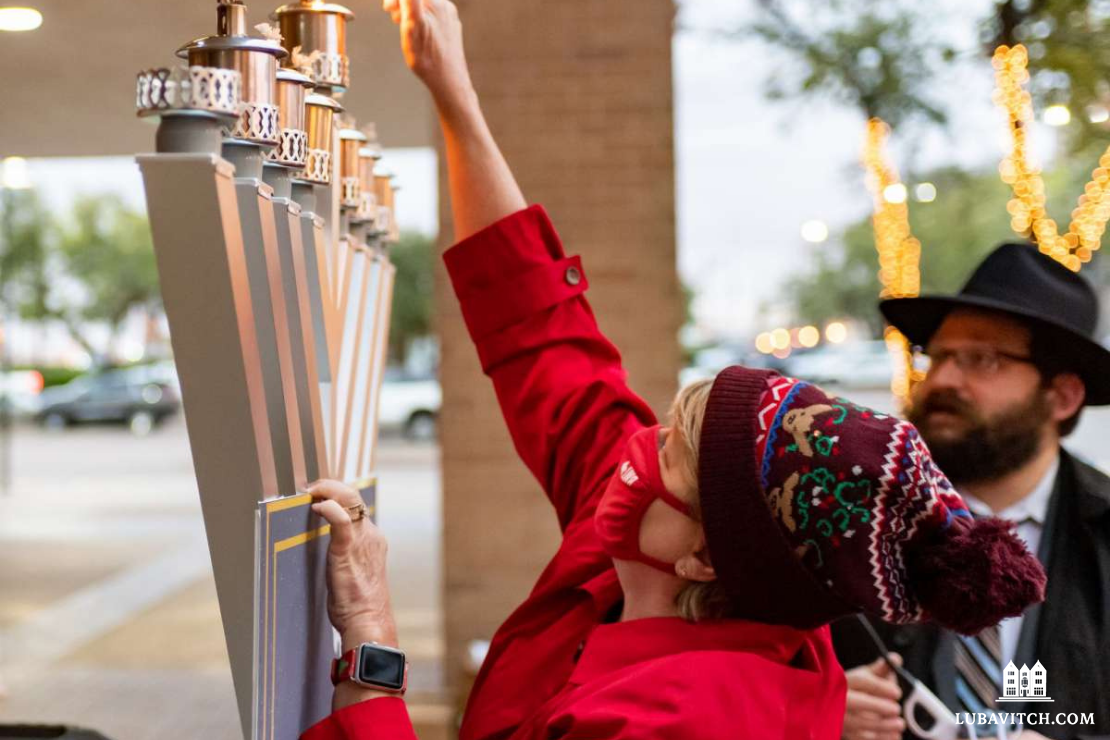 Mayor Becky Ames of Beaumont, Texas lights the central candle on the town’s first public menorah this past December as Rabbi Saadya Kaufmann stands by.

Rabbi Saadya Kaufmann, director of Chabad of Texas Towns, runs his Chabad house from the driver’s seat of his car. He clocks several thousand miles a month driving across the sprawling state of Texas, and around Jewish holidays, he spends even more time on the road.

Texas is the second largest state in the U.S. and home to over 100,000 Jews. The majority of these Jews reside in big cities like Houston, Dallas, and Austin, which have thriving Chabad centers. But many live in rural areas, miles away from any Chabad House or other significant presence of organized Judaism.

In the summertime, Chabad of Texas, Chabad’s regional headquarters, sends young rabbinical students across the state to visit these small enclaves of Jews. Lovingly dubbed the “Roving Rabbis”, they help folks wrap tefillin, share words of Torah, and engender feelings of connection and brotherly love.

But what could be done for these Jews during the rest of the year? Rabbi Saadya Kaufmann became the solution.

Rabbi Saadya works full-time for the Orthodox Union as a mashgiach, a kosher supervisor, overseeing the kashrut of food production plants all across Texas. So his days were already spent in his car, driving from plant to plant, and back home to his family in Houston. At the suggestion of Rabbi Shimon Lazaroff, Regional Director of Chabad of Texas, Rabbi Saadya began to connect with local Jews on his travels around the state. Last June, Rabbi Saadya started Chabad of Texas Towns, becoming the area’s first full-time Rabbi.

Chabad of Texas Towns’ jurisdiction spans the width and breadth of the state, and it services upwards of thirteen rural towns, some as far as seven or eight hours from Rabbi Saadya’s home base in Houston.

For many Jews, Chabad of Texas Towns provides an invaluable Jewish connection and sense of community, especially in current pandemic times when so many feel isolated. Rabbi Saadya says his message to his congregants is always, “The Jewish community is one and we want you to be connected. We want you to not feel isolated and to know that you’re part of a bigger community.”

This past Purim, Rabbi Saadya sent an enthusiastic pair of rabbinical students to visit the town of Waco, Texas. They read megillah, shmoozed, and brought Purim joy to the local residents. A few days later, Rabbi Saadya received a letter detailing one resident’s Purim experience. The writer shared that he had been in a car accident a few months prior, and the two students’ visit had helped him smile for the first time in ages. “It was a joyous chag (holiday) in the midbar (desert),” he wrote.

Here’s to many more impactful connections and encounters as Chabad of Texas Towns embarks on its second year, taking on the frontier of Chabad’s outreach mission in the small dusty towns of rural Texas.