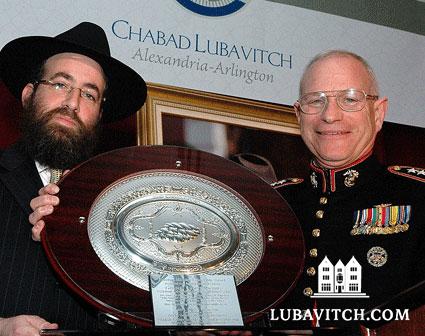 The sixth anniversary celebration of Chabad-Lubavitch in Alexandria-Arlington seemed an ideal opportunity to honor U. S. Marine Corps assistant commandant General Robert Magnus —the highest ranking Jew in the U.S. Marine Corps—with the Freedom Military Leadership Award on behalf of the men and women of the US Military.

General Magnus proudly reminded city and county government officials of the Jewish community’s contribution to the US Military dating back to 1650 and every subsequent war.

In her comments at the podium, Mrs. Newman, Director of Chabad Hebrew School focused on the critical importance of Jewish education and the role of parents in shaping their children’s character at the earliest stages of life.
Dr. Peter Bernad, President of Neurology Associates, presented with the Maimonides Physicians award, expressed appreciation for the leadership of Lubavitcher Rebbe, Rabbi Menachem Mendel Schneerson and his transformational contributions to world Jewry.

It was an evening overflowing with gratitude to Chabad, but Rabbi Mordechai Newman, Director, Chabad Lubavitch of Alexandria-Arlington gave accolades to the local community:

“It is testimony to the character of the Alexandria-Arlington community that has gathered together to create such a beautiful and energizing atmosphere of inspiration, vision and leadership to help make the world a better place,” he said.