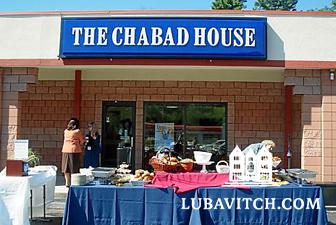 Mayor Terry Bellamy proclaimed a “Chabad Day of Goodness and Kindness” in honor of Chabad of Western North Carolina’s inauguration of its new home on 660 Merrimon Avenue.

Beneath the bold white-on-blue Chabad House sign, the door of the new space opens into a large room where prayer services and community events will be held. An enthusiastic bunch of 150 poured in, the fresh scent of new paint and carpet still in the air, and peered into the rabbi’s office and the children’s room during the grand opening event on September 30.

Only in town since July 2006, Rabbi Shaya and Chana Susskind have quickly knitted themselves into the Asheville’s spiritual, artistic and civic life. Rabbi Susskind teaches adult education classes, part of the Jewish Learning Institute, to capacity crowds. The Jewish Women’s Circle attracted a group of 12 to its first meeting last October, and had 60 women at its most recent evening gathering.

“Everyone seems to like the work Chabad does,” said community member and supporter Jill Zimerman. “They seem to bring a spirit here that unites all Jews, and not just Jews. The entire community is happy to have them here.”

Asheville, on the western end of presidential hopeful Sen. John Edwards’s state, in the shadow of Biltmore Estate, America’s largest home, and the Great Smoky Mountains, is the kind of place that thrives on the Susskinds’ energy and initiative.  Outside Magazine named Asheville the “Best Southern Town,” and Frommer’s called it one of the “Top 10 Travel Destinations” for 2007 for its white water rafting, rock climbing, and touring options.  Asheville’s cafes and galleries remind Zimmerman of  “the West Village in the seventies.”

Asheville’s outdoorsy and artsy nature helped the Susskinds feel welcome from the start. “Asheville is very accepting,” said Rabbi Susskind. “People here are intrigued by culture, customs, traditions. They are curious, very educated people who want to study. There’s a lot of respect for everyone.”

Catering to Asheville’s creative side is central to the Hebrew School, which began this fall with seven students. At Hebrew School of the Arts, “everything is very hands-on,” said Mrs. Susskind. “The kids do a lot of crafts, singing, baking, dancing.” One Sunday a month, after Hebrew school, the glue and glitter continues to flow at Jewish Arts Program for Kids.

The Susskinds held off on opening a Hebrew School until the new space was ready. Previously, their Chabad activities were held in their apartment’s club house or in rented spaces around town. “Children need a steady place, a classroom to call their own,” said Mrs. Susskind.

Parents who wish to get a view of Chabad’s innovative Hebrew school can explore their website, which the Susskinds update with photos and links each week. It’s a popular site. According to internal Chabad statistics, the site has ranked among the top ten most visited Chabad center websites.

But on the gloriously sunny day when supporters affixed the mezuzah on the door of the center, the appreciation of Chabad and the Susskinds was more visceral than virtual.

“Chabad in Asheville has provided the hope that through its presence all citizens will be inspired to create a better world,” the Mayor said. Chabad “heightens the spiritual and moral consciousness of our city and counties’ residents through educational initiatives and acts of goodness and kindness.”

Related Articles
View All
New Centers
Growing Gains in Toronto
Even as he cut the ribbon on the doors of the Romano Chabad Centre, Rabbi Mendel Bernstein knew it was too small.
New Centers
It Happened At The Dinner Table
It’s the only state in the U.S. where support for Israel is as official as its state-issued motor-vehicle license plates. In 2014, when entrenched hostility…
New Centers
A Mikvah in the Dominican Republic—Seventy Years Later
The newly-inaugurated mikvah in Santo Domingo, Dominican Republic looks like any other Jewish ritual bath. Bricks of Jerusalem stone line the walls, the water is…
New Centers
Women’s Mikveh To Open in Nigeria
West Africa will open the doors to its very first state-of-the-art mikveh in late spring 2016.
Get Inspiration to your inbox!
Newsletter
Join our weekly newsletter for inspiration and updates
Donate
Find Your Local Chabad Center
Chabad
About Chabad-Lubavitch
About Chabad Lubavitch
The Rebbe
Headquarters
Magazine
Magazine
All Magazines
News
News & Updates
In The Media
Impact
Social and Humanitarian
Social and Humanitarian
Education
Education
Community
Community