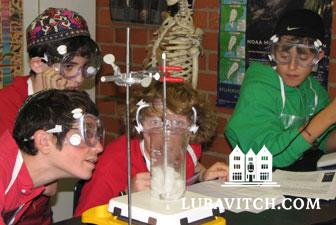 Children at the Hebrew Academy in the science lab.

Soaking up the brilliant California sunshine, 189 new solar panels atop the roofs of Chabad's Hebrew Academy in Huntington Beach are teaching students a living lesson in going green and cutting the school’s energy bills.

“It’s a move to show student the importance of conserving energy, respect for the environment,” said Rabbi Yitzchok Newman, dean of the school which educates 350 students from preschool through twelfth grade. It’s a mitzvah to conserve resources, he said, and it helps illustrate the power of the sun’s rays, a common metaphor found throughout Chasidic philosophy.

Eight thousand square feet of solar panels came with a price tag over $200,000. Solar panel manufacturer Sharp USA and integrator HelioPower, the firmthat installed the panels, both supported the school's green initiative. A portion of the cost was covered with a federal rebate program. The Karp Federation Challenge grant and another donor funded the rest. Hebrew Academy expects to save $1000 each month off its electric bill, dimming its annual $70,000 bill by nearly15%.

One of the first Jewish day schools in the area to be making such a significant commitment to solar energy, Hebrew Academy, founded in 1967, is known for other firsts. It twice received U.S. Department of Education’s Blue Ribbon Excellence Award, and is one of the few schools in Chabad-Lubavitch’s network with a junior Olympic sized swimming pool.

However, the solar panels are not the school’s first foray into environmental action. Dozens of blue boxes placed in strategic spots throughout the school’s 11-acre campus are filling up with recyclables. Director of Admissions Alex Greenberg was motivated to start the recycling program because of her sons, Zachary, a fifth grader, and Noah, a kindergartner at the school.

“I am really worried about our next generation. We are already feeling the ramifications of pollution, smog and lack of fuel. We have to start somewhere,” she said. Bringing paper to the recycler has more than moral rewards. It nets the school $18 per ton.

Noah’s teacher, Robin Leclercq, also the school’s assistant preschool director, has used the solar panels as a starting point for green talk with her young students.

“We have given them some of the basics such as, the sun can provide energy to help run our school so we don't have to rely on energy created by man,” she told Lubavitch.com.

Going green is a process, school officials said, and there’s much more to do until sneakers are the sole source of the school’s environmental footprint. With panels and a recycling program, Hebrew Academy is getting greener by the day. Melanie Alkov, an administrative assistant in the school 23 years, thinks it’s a step it the right direction.

“We are always taught to repair the world, to do tikkun olam. What better way is there to do it than in school,” where tomorrow blooms.

Related Articles
View All
Education
Two Universities React as Antisemitism Steps Out of the Shadows
While college administrators debate the limit of free speech, Chabad campus leaders take action.
Education
A Hebrew School Becomes A Community
How has one innovative Hebrew School made the Big Apple the city of choice for Jewish families?
Education
Growing Gains in Toronto
Even as he cut the ribbon on the doors of the Romano Chabad Centre, Rabbi Mendel Bernstein knew it was too small.
Education
Can An Underfunded School Actually Transform a Community?
Small Jewish day schools—those with less than 100 students—occupy a fragile place in our society. Located outside of centralized Jewish communities, these schools must fight…
Get Inspiration to your inbox!
Newsletter
Join our weekly newsletter for inspiration and updates
Donate
Find Your Local Chabad Center
Chabad
About Chabad-Lubavitch
About Chabad Lubavitch
The Rebbe
Headquarters
Magazine
Magazine
All Magazines
News
News & Updates
In The Media
Impact
Social and Humanitarian
Social and Humanitarian
Education
Education
Community
Community