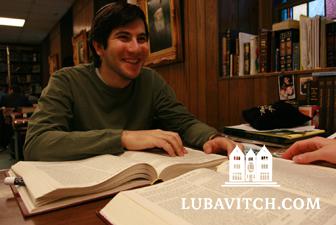 Pundits predicting uncertainty is a certainty this time of year. Iraq – stay or go?  Credit crunch – bottom out or rebound? Democrat or Republican? When the unknown comes a knockin’ it affects more than voter turnout and Prozac prescriptions. It touches the soul.

The Jewish soul’s refuge in times of disquiet is not a bagel and lox to-go, but Torah study. Chabad Lubavitch centers have been experiencing an upsurge in Jewish people seeking serious Jewish learning experiences. One remarkable instance of this phenomenon is the 94 men attending Rabbinical College of America’s 10-day winter yeshiva session in Morristown, NJ.

(lubavitch.com/LNS) David Altman figures he’s in for a lot of vacuuming when he gets home. His wife, Alicia, pregnant with their fourth child, gave him the go-ahead to spend December 24 through January 3 at Chabad Lubavitch’s flagship yeshiva, and he’s really, really grateful.
“It’s a total immersion experience,” said Altman, a contractor from Hillside, NJ. “I have plenty of questions, and it’s a good environment to get them answered. I want to fill up my cup as much as I can.”

Altman’s story is familiar to many who become observant later in life. He and his family took on the mitzvahs six years ago, and sent the kids to day school. He took the leap toward observance without the luxury of a full Jewish educational background, and now he’s filling in the gaps. “It’s an experience to draw on for the rest of my life.”

Altman is one of 94 students at the Taste of Yeshiva program this winter. They’ve come from across ten time zones and over language barriers to study with RCA’s rabbis and the rabbinical students on the tranquil, 82-acre wooded campus. A surgeon, a former pastor from Oklahoma, new college grads and business people all packed their bags for yeshiva.

They came from Argentina, Israel, Arizona, Ohio, Montreal, Toronto, California, Ithaca, NY; and Sugarland, TX.  They’ve forgone winter ski trips, cashed in hard-earned vacation days, and left family and business obligations on hold to commit to twelve-hour days – or longer – of lectures on Chasidic philosophy, and breaking their teeth over a page of Talmud.

RCA has been offering winter study sessions for ten years. This year’s high numbers rank right up with last year’s when 50 students came from Brazil in addition to others from the States. The upsurge in interest in commitment to a full day of intense Jewish study parallels the overwhelming response to the new Mayanot Women’s Program in Israel. Three times the expected number of students enrolled for the program’s first semester. In the same vein, Jewish Learning Institute this month rolled out MyShiur:Advaced Learning Inititative to bring Talmud courses to adults in fifteen select cities.

“The world is increasingly complex, and people are looking for something more meaningful, permanent and spiritual,” Rabbi Herson said to Lubavitch.com.
“The question is not why a Jew gravitates to Torah, to something higher,” he says. “A Jewish person’s soul is formatted to have a relationship with G-d through Torah. The question is why doesn’t he.” Troubled times reveal that instinct.

Moving students to heed that instinctive calling and actually board a plane to Chabad’s yeshiva in New Jersey is part of Rabbi Boruch Hecht’s job. He’s spent months making contact with individual students and Chabad-on-Campus representatives alerting them to the benefits of attending the deeply subsidized program.

Classes on the meaning of prayers, question and answer sessions with the yeshiva’s top educators, and being on the same campus where tomorrow’s rabbis were taking their rabbinical exams attracted many students. Other more advanced students were drawn by the yeshiva’s track record of teaching people from all backgrounds how to learn Gemara.

Rabbi Hecht has a much larger field of students to contact because of the Rohr Family Foundation’s funding that led to a boom of Chabad centers on college campuses. Of the thousands of Jewish students attending Chabad programs at one campus, hundreds will attend classes regularly, and tens will want to seek out more study opportunities. Multiplying the number of Chabad centers running vibrant campus programs has a trickle up effect on the census at intense programs like the Rabbinical College.

For Andy Balkin, a University of Texas at Austin student, attending yeshiva is the next step in his quest to learn more about Judaism. Balkin began digging into Torah in college, and attends Chabad on campus classes. He tries to study Torah and its commentaries when he isn’t working toward his geography degree. “It’s frustrating to learn on my own because there are a lot of things I do not understand. It is nice being surrounded by rabbis and [rabbis in training].”

Timing of the winter session in yeshiva made it possible for Edward Angert, who graduated New York’s Farmingdale State College in December to attend. “Now I have a better understanding of what is going on during services, in donning tefillin. G-d willing, I will be going to shul more than just on Saturdays.  I’d like to keep on learning.”

Related Articles
View All
Education
Florida Schools Set for Silent Start to the Day
Landmark bill passed with bipartisan support will mandate a moment of silence for 3 million public school kids.
Education
The New Day Schools
This fall, in the midst of the pandemic, four Jewish day schools opened in cities up and down the East Coast. Almost no one noticed.
Education
A Moment of Silence, a Year of Hard Work
Larry Pearson does not have school-aged children. He isn’t a teacher. Nor is he a rabbi. So why is he attending local school board meetings?
Education
Jewish Day Schools Make The Grade
Amid a national discourse about the transformation of America’s school system in the wake of the pandemic, Jewish day schools are enjoying an unexpected boost:…
Get Inspiration to your inbox!
Newsletter
Join our weekly newsletter for inspiration and updates
Donate
Find Your Local Chabad Center
Subscribe
|
Log In
Chabad
About Chabad-Lubavitch
About Chabad Lubavitch
The Rebbe
Headquarters
Magazine
Magazine
News
News & Updates
In The Media
Impact
Social and Humanitarian
Social and Humanitarian
Education
Education
Community
Community